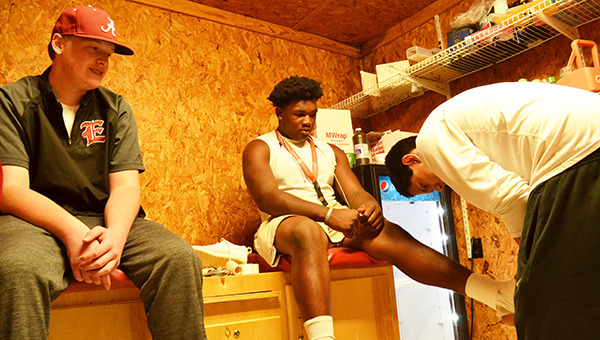 Escambia Academy athletic trainers Ben Martin (left) and Kevin Gumapac (right) have been assisting the football team all season. Both are shown working on getting tape off of Trae Lee’s ankle Friday night. | Andrew Garner/Atmore Advance

Anything from taking care of small cuts, bruises, muscle cramps to making sure athletes get hydrated, Escambia Academy athletic trainers Ben Martin and Kevin Gumapac are there.

Before and during the season, Martin and Gumapac — who shadowed EA coach J.P. Sawyer for a time — have served as the team’s trainers. With every injury or pre-practice or game stretch, either one is looking to help with a diagnosis.

“We’ve learned a lot from J.P.,” Gumapac said. “We pretty much shadowed him.”

Gumapac said Sawyer was a certified trainer for the University of Alabama during the Crimson Tide’s 1992 National Championship season.

Martin said as trainers, they diagnose injuries before players go to the doctor, tape players before games, handle wound care, deliver water if needed and just about everything else.

While many fans may see Martin and Gumapac keeping busy on the sideline during games, there is a lot fans don’t see.

“There is a lot of stuff behind the scenes people don’t see as far as rehabbing goes,” Gumapac said. “Especially during practice days. Ben and I switch practice days, and we may be there the same day, too. It just depends on our class schedules.”

Martin said rehabbing entails working with the athletes to help make their muscles stronger, for example.

“Kainoa (Gumapac, Kevin’s younger brother and EA quarterback) has a sprained AC joint in his shoulder,” Martin said. “We do band work and spend days strengthening the shoulder before he can throw with it.

“The stronger your muscles are, the less injuries you’re going to have,” he said. “We just focus on keeping them as healthy as they can be.”

When asked what inspired them to be the team’s trainers, Gumapac and Martin said their love of sports and being around athletes were two big reasons.

“I’ve wanted to do this since I was in middle school,” Gumapac said. “I came to a varsity game and saw trainers standing on the sidelines and was like, ‘who are those guys?’

Gumapac couldn’t participate in football because of a heart condition that prevents him from sustaining full-on contact. In fact, he spent some time during his senior year as the team’s trainer.

Both are studying at Faulkner State Community College, and will extend their athletic training experience to the college level. Martin will be a trainer for the Sun Chiefs’ men’s basketball team, and Gumapac will do the same for the women’s basketball team.

Martin has plans to go into pre-med to be an orthopedic surgeon after getting an athletic training degree just in case medical school doesn’t work out.

Gumapac is going into an athletic training at a future university.

Northview rests up, readies for Graceville

Northview’s bye week and four solid practice days came at a good time as the Chiefs focus their attention on... read more