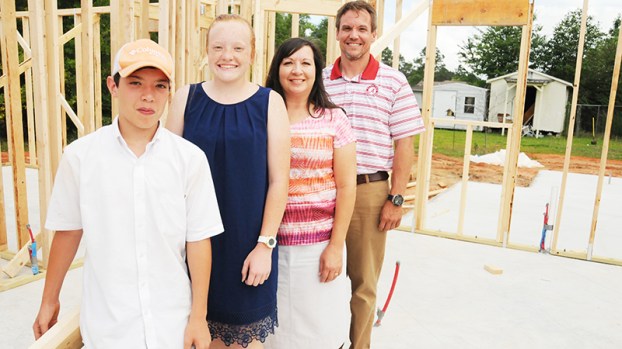 Out of the ashes, the Lee family is rebuilding.

The day was Oct. 24, 2016, a Monday, and Donna had just come home from work. Scott, her husband, was in the front yard weed eating.

“When I came through, my daughter (Kyla) went up toward the kitchen, and called me and said, ‘come and look at this,’” Donna said. “The whole back poarch was covered in smoke.”

Donna went to the back looking for a fire in the fire pit, but nothing was burning.

“Flames were shooting out of the lawnmower,” she said. “Scott was coming around the house, he got over and tried to pull the lawnmower out.”

Scott tried to pull the lawnmower out, but the wheels had already melted.

“I was trying to get the hose to work, and calling 911,” she said. “The kids had already come back through the house, and came around the other side.”

With everyone out, Donna said she noticed that once the fire hit the vinyl siding at the top of the poarch, “it was like throwing gas on it.”

“We couldn’t do anything,” she said. “You start seeing and hearing the windows crashing, and start seeing smoke coming out of the attic.

“It was a nightmare,” she said.

Firefighters from Atmore and Poarch battled the blaze for several hours, and even had to come back later that night because the house caught fire again.

The timing of the fire came right as the Lees were finishing a remodel. They were doing touch ups, painted and redid the flooring throughout the whole house.

“We even opened up one wall through the den,” she said. “That Sunday night, I had started bringing boxes out to bring pictures back to where they go in the house. That was my plan for Monday. My plan changed.”

Watching their house burn to the ground, the Lees weren’t thinking about where they were going to live.

While firefighters did their job, the Lees’ friends and neighbors started showing their support for the family.

Tori Singleton, Donna’s niece, without hesitation told her that they can live with them.

“She came to the house while it was still on fire,” Donna said. “She told us we can stay that night. The first night we stayed at the hotel because it was so late. There was too much going on.”

The Lees went on to live at the Singletons and are still living there until their house is finished being built.

Donna said it hasn’t been a burden on the Singletons.

“Staying with her, it’s helped her out,” she said. “Throughout all of that, she’s gotten into church and gotten saved. If it had to happen, for her to get in church, then it was worth it.”

While the Lees lost just about everything from the fire, they have gained something that’ll never go away — appreciation to the community.

During the fire, neighbors showed up offering clothes to the Lees. Escambia Academy held a clothing drive for the family.

“I realize now that people in this town really care and try to help you,” she said. “Like I said, I was just in awe of how everybody stepped up. Sara Smith, she’s a really good friend of mine, she was there that night. She’s helped a lot. Brandy Giger has done great, too.”

The Lees’ new house, which is being built on the same spot as their old house, is expected to be completed in August.

The decision to rebuild came as an easy one for the Lees.

“We didn’t know what insurance was going to say,” Donna said. “After talking to the contractors, not all of them guaranteed it would work because they didn’t know the damage to the slab.

“They asked us, what do you want to do,” she said. “Honestly, we’d like to start over. That’s what we did.”

Through it all, the Lees are so appreciative of the community’s support.

“The community has been great,” Scott said. “We’ve had an outpouring of support.”

Scott said complete strangers have been helping them.

“We’re really thankful for the prayers and support,” he said.

Scott said through this rebuild, he’s learned a lot about insurance and how important it is to keep a log of all of your belongings in case something like this were to happen to another family.