The mayor of Foley, Stephanie Bryan, Tim Martin, and members of the Creek Indian Enterprises board wait for opening ceremonies to begin at OWA Thursday evening.

The Park at OWA will officially open its doors to the public Fri., July 21, but hundreds got a sneak preview at media night Thursday.

Stephanie Bryan Tribal Chair and CEO for the Poarch Band of Creek Indians, said, “The Tribe is excited to see the vision for OWA transform into a reality. This family destination near Alabama’s beautiful beaches is proud to offer world-class entertainment to its guests.” 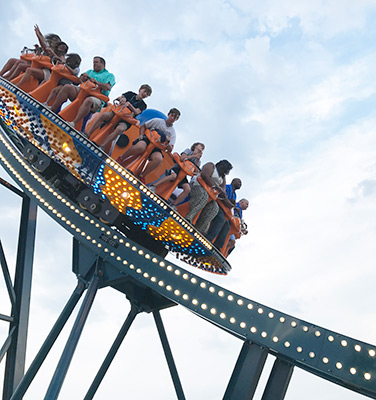 There were squeals and thrills on the Wave Rider, one of The Park at OWA’s seven thrill rides.

Bryan said it is gratifying for the Tribe to create jobs in Alabama. The Park at OWA represents a $500 million investment, and the bold vision of our Tribal leaders.”

The 21-ride amusement park is the first in a series of openings for OWA. The retail and dining tenants will begin opening in early September, including the second largest U.S. location of Wahlburgers, Sunglass World, Fairhope Soap Company, Alvin’s Island, Hershey’s Ice Cream Shop, and Utopia among others.

The Park, located off the Foley Beach Express, includes six kiddie rides, eight family-friendly rides, and seven thrill rides. It is the central piece of a 520-acre destination resort that will include hotels, a luxury RV resort, and an outdoor waterpark.

Atmore native Perry Jones is playing the lead character in Roald Dahl’s “Willy Wonka,” which is being presented by the... read more