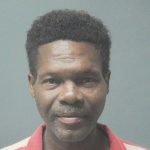 An Atmore man has been charged with attempted murder in connection with a shooting that occurred on Aug. 9 on Patterson Street, according to police officials.

“He (Ballard) got into it with another male victim and accused him of stealing a bicycle,” Brooks said. “He retrieved a firearm — a handgun — and started shooting at the victim. He did not hit the victim.”

Brooks said officers with the APD responded to the scene around 6 p.m. and were able to identify him prior to his arrest.

The chief said that the two individuals Ballard was with, Kenyatta McCants and Eddie Tolbert, were charged with felon in possession of a firearm and tampering with evidence for trying to hid the handgun. McCants was also charged with public intoxication.

Brooks said the event was isolated and could’ve turned deadly.

Per the Alabama Law Enforcement Agency: Alabama State Troopers are requesting assistance locating a vehicle in connection with a fatality... read more