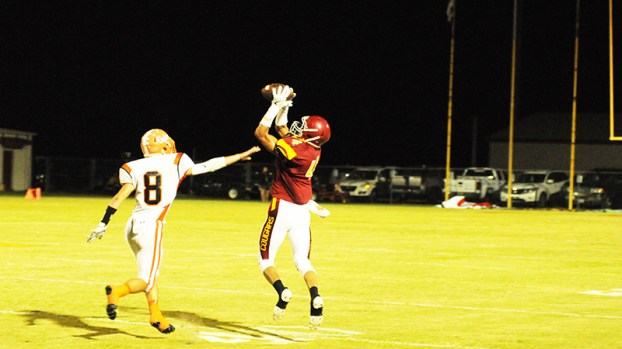 It didn’t take long for things to start clicking for Escambia Academy’s offense this season.

The second-ranked Cougars have scored an average of 41.3 points per game this year, and have outscored their opponents 331-108.

Recently, EA head football coach Hugh Fountain looked at a stat that proved to be notable for his offense. EA has scored in 75 percent of its quarters this season alone.

“We can run and we can pass the ball,” Dawe, the quarterback, said. “We’ve got receivers and we’ve got running backs. We don’t really have one identity.

“We have multiple identities,” he said.

Robinson, a wide receiver, said the offense is confident in its playmaking ability.

Flavors, a receiver and running back, said the fact that the offense is loaded chalk-full of playmakers is the big key in the success this season.

“Everybody’s doing their job,” he said.

So far this season, Dawe has compiled 1,001 yards in the air going into this week’s big contest at top-ranked Autauga Academy in Prattville. He has completed 40-of-75 passes with eight touchdowns.

Turner has 15 touchdowns on 690 yards on the ground, and McGhee has scored eight touchdowns on 435 yards. Both are averaging 9.5 yards per carry.

Flavors has three touchdowns on the ground, and multiple in the air.

Fountain said having a passing game has helped the team a lot this year.

Many times during games, Dawe has connected with Robinson for deep passes, and the QB added that he’s happy that he not only has Robinson down field, but others as well.

A big key to any offense is its offensive line.

Flavors said having this season’s offensive line is a big advantage.

Flavors said a big comparison from this year’s offense to last year’s is that this season, they play more calm and as a family unit.

“We’ve got better chemistry than last year,” he said. “We’ve got more depth.”

It was another great weekend for the Poarch Creek Indians Swim Team that joined with the Brewton Local Area Swim... read more