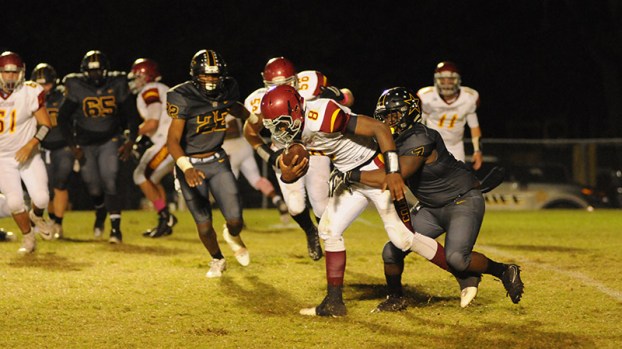 PRATVILLE — “We take pride in the way we play football. Tonight, there wasn’t much to take pride in. It’s not because they’re No. 1. It’s just because we didn’t do what we were capable of doing.”

EA couldn’t get in a rhythm offensively throughout the game. At halftime, the Generals led 28-6.

Fountain said at the break, he told the team that it needed to find something in itself on the gridiron.

“I can’t really say that we did (that),” he said. “I don’t think the second half looked better than the first. That’s just (what I’m saying) now without looking (at the film).

“You’re always proud of them for totally not quitting,” he said. “We’ve just got to get better. We’ve got to play smarter.”

The Cougars (8-1) could’ve ducked and covered late in the first half, but they strung together a good half-ending drive.

EA drove the ball 46 yards, which was eclipsed by a 44-yard pass from Jabe Dawe to Neikel Robinson.

That pass set up a 1-yard touchdown run for Louie Turner with no time left in the half. EA didn’t convert the 2-point conversion.

“Neikel gave us a chance right before halftime,” Fountain said. “We had them in a good position, but we just didn’t do anything.”
Both traded possessions before AA got on board with an 8-yard touchdown rush from quarterback Tripp Carr with 6:18 left in the first quarter.

The Generals got the ball back a short time later after a Patrick McGhee fumble on a toss from Dawe.

Carr took advantage on the first play to find James Woods for a 20-yard scoring pass. AA led 13-0 with 4:49 left in the first.

EA’s defense stepped it up a bit from there, but AA found the end zone more than midway through the second quarter on a 5-yard TD rush from Jordan Epkins.

To put some more salt on the wound, the Generals increased their lead by four touchdowns with a 30-yard strike from Carr to Kendrick Rogers late in the second quarter.

EA didn’t get anywhere on its first drive of the second half, and AA went on to score on its next possession as Carr found the end zone from 36 yards with more than 10 minutes left in the third.

The Cougars answeres with a 58-yard touchdown run from Turner less than a minute later to cut the game to 35-12.

After another turnover, the Generals took advantage again and Djay Gardner punched it in from 2 yards with 2:42 left in the game.

EA could’ve quit, but didn’t as Dawe found Fred Flavors for a 44-yard scoring pass with less than 2 minutes left.

Cougars stay at No. 2 in AISA poll

Nothing changed much in this week’s top two of the Alabama Sports Writers Association’s AISA football poll, which was released... read more