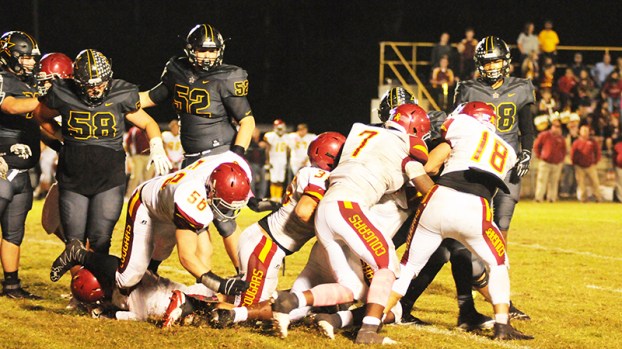 Escambia Academy isn’t planning on giving Cornerstone Christian anything advantage wise this Friday night in the first round of the AISA Class 2A playoffs in Canoe.

The Cougars (9-1) are coming off a monster 34-28 win over Bessemer Academy, a week after falling to Autauga Academy, to end the regular season. CC (6-4) has won two of its last three games.

Last week’s win was the first time the fourth-ranked Cougars beat the Rebels at Norton Field in the city just north of Birmingham. The last time EA beat BA was in the 2014 state championship game.

Fountain said the boys did a good job in the second and third quarters. The Cougars led 34-14 going into the fourth.

He said the offense had control of the ball game, and noted a 6-7 minute drive in the game for a two-touchdown advantage.

Fred Flavors led EA with 136 yards on 13 carries and two scores last week. He also had two receptions for 34 yards.

Fountain said it’s always important for a team to go into the postseason on a win streak, especially when your team comes up with a quality win against a good opponent.

“Bessemer has always been one of the toughest teams we’ve faced,” he said. “We made a couple of good plays. I felt like the game was very important to us. We played a team that’s physical like Autauga, as far as the line and speed. When you play somebody like that that’s physical, anytime you come up with a victory, you’re proud of it.”

As far as this week is concerned, EA is going to have to play well on both sides of the ball, Fountain said.

“We’ve got to keep pressure on them,” he said. “We have to play well on all phases of the game, and not to give them anything; make them earn it. We don’t want them to earn anything easy, whether it’s a third-and-one or a kickoff return.”

Another facet of the game that’s important for the Cougars this week is getting off to a good start, the coach said.

Additionally, EA will be holding senior night ceremonies prior to the game as it has only had four home games this season. Kick off is at 7 p.m.