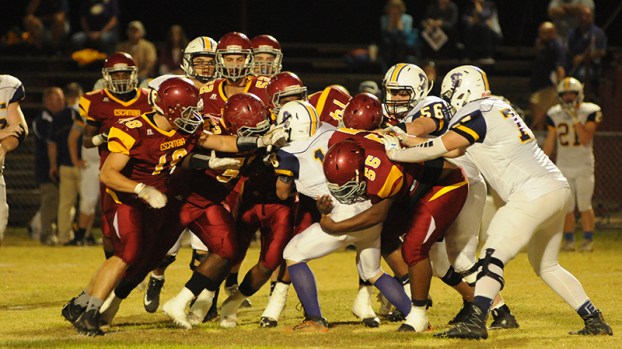 EA advances to AISA Class 2A semifinals next week, will play Macon East in Cecil

Escambia Academy’s Jabe Dawe accounted for three touchdowns to help lead the Cougars to a 55-0 rout over Cornerstone Christian tonight in the first round of the AISA Class 2A state playoffs.

The junior quarterback rushed for two touchdowns and threw for one in the win. Dawe 4-for-5 for 157 yards and a score in the air, and rushed for 13 yards on two carries.

For Dawe, this is his first playoff win as a starter.

“It feels great,” he said about the win. “We’ve been working all summer for it. It was pretty good to get that win.”
As far as his play on the field, Dawe said the whole team is clicking on the same level.

“(Coach Hugh Fountain) was giving us a pep talk in the locker room, saying that we just need to come out and click like we did (during a 34-28 win) against Bessemer (Academy last week),” he said. “We got that set in our minds and started clicking.”

Next week, the fourth-ranked Cougars (10-1) travel to face Macon East — who beat Clarke Prep 38-34 tonight — in the semifinals of the playoffs. EA needs one more win to reach the state title game.

EA took control from the start, scoring four touchdowns — two offensive, one defensive and another on special teams — in the first quarter. By halftime, the Cougars led 49-0 to force the clock to run during the second half.

Fountain said getting off to a good start was key in the win.

“The one ting we said before the game is let’s get off to a great start, and we did to start the first half,” he said. “We carried how we played last week into this game. We didn’t have many penalties in this game, not a lot of mistakes. I just think that we didn’t have but 15 offensive plays in the first half. Things were happening so quickly for us. It was a good win for us. Hopefully, it will give us momentum, and we’ll carry it with us.”

For the game, EA racked up 316 yards on offense, compared to Cornerstone’s 49.

The following are the scoring plays for the Cougars by quarter: