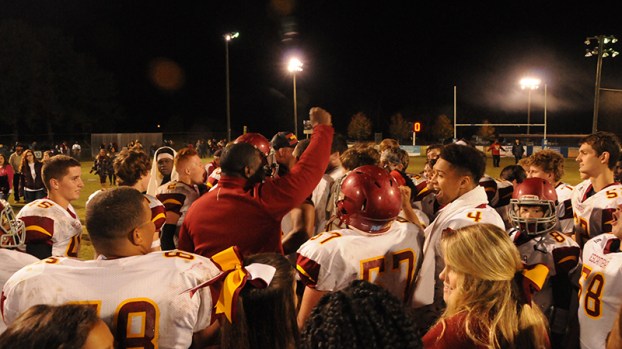 EA advances to AISA 2A championship, to play Autauga Academy

CECIL — Escambia Academy is going back to the state championship.

The fourth-ranked Cougars beat Macon-East 50-13 in the AISA Class 2A state semifinals on the road to punch their second-straight trip to the title game in Troy. EA will face top-ranked Autauga Academy for the second-straight year this coming Fri., Nov. 17, at 3:30 p.m.

In the semifinal win, the game was put out of the Knights’ reach in the first half. EA (11-1) scored seven touchdowns to lead 50-0 by halftime.

EA head football coach Hugh Fountain said he thought the game was going to be closer.

“I really expected it to be a different type of ball game, but we came out totally focused,” Fountain said. “We take pride in who we played all year. Our schedule prepared us for this game. The people we played all year helped us be prepared for this difficult of an opponent, and to take care of business. I was proud of them.”

Jabe Dawe accounted for two touchdowns, including a 66-yard pass in the second quarter; Fred Flavors returned a pick six 35 yards; Louie Turner scored twice on the ground from 20 and 23 yards; and Patrick McGhee scored from 45 and 25 yards out. MJ Jones caught the 66-yard scoring pass from Dawe midway through the second quarter.

Macon-East scored two touchdowns in the fourth quarter during a second half with a running clock and none of EA’s starters seeing playing time.

During the win, the Cougars pulled down four interceptions — three on defense and one on special teams.

Flavors caught two interceptions, MJ Jones caught one and Shannon Wheat had one.

Flavors said the pick six play was one the team practiced all week.

“I just know we were working on the play all practice,” he said. “I was telling MJ to stay back, and he stayed back and he caught it. Then me, I just gathered a little bit and caught it and scored.”

Fountain said the defensive backs have risen to be one of the main strengths of the team.

“We knew they threw the ball a lot,” he said. “We have some good defensive backs. That’s the strength of our team, really. We did a good job of breaking on the ball and getting the football.”

On getting back to the state championship, Fountain said it’s been a focus for the team all year.

“Just us having the chance to go back and play again is something we focused on all year,” he said. “It’s hard to keep your focus in 18-20 weeks on a solid goal. We did a good job of it.”

For defensive lineman Jo Nance, a senior who is a T.R. Miller transfer, getting the opportunity to play in his first state championship is quite an achievement.

“It’s amazing,” Nance said about the feeling. “I’ve never been.”

ONE AT A TIME

Cougars to visit Macon-East in AISA 2A semifinals One game stands in the way of Escambia Academy advancing to the... read more