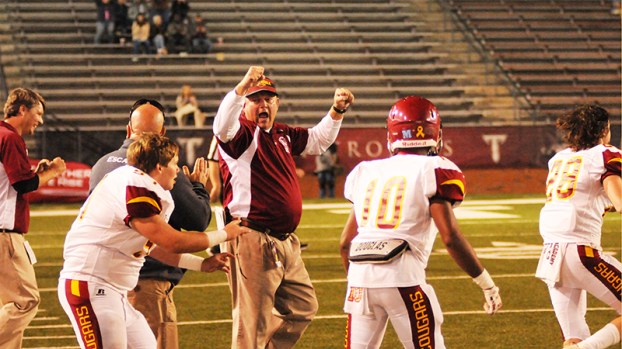 TROY — The party bus is on its way back to Canoe.

Escambia Academy is celebrating its second state title in school history after knocking off top-ranked Autauga Academy in the 2017 AISA Class 2A state championship in Veterans Memorial Stadium at Troy University.

“That’s a feeling that won’t go away from you,” Fountain said after the game. “When you win it, that’s just something that you’ll have and be proud of for the rest of your life.”

To the Cougars, this win came a year after a 28-21 loss in the title game to the Generals. Additionally, this is the first victory for EA over AA over the past two seasons.

This win for Fountain marks the head coach’s second career title. The Cougars have made it to the state title game three times in the last four years.

“It feels great,” EA senior wide receiver Neikel Robinson, who had two receptions for 66 yards and a touchdown, said. “Words can’t describe it. I’ve been waiting for this for four years. To win it and go out like that with a bang; it’s a great feeling.”

For EA senior receiver Fred Flavors, getting this win was a big moment as he also played on the 2014 championship team.

“Coming back off of a lost last year; it’s just great to beat a good team,” Flavors said. “It’s a special moment for everyone.”

During the regular season, the Cougars fell to the Generals 42-20 in Prattville.

Fountain said it took a lot of will power for the team to come out victorious over his team’s archrivals.

“To me, that’s what it’s all about,” he said. “I felt confident that we had done enough in all of the off season and especially in the last couple of weeks to have the right will power to get the job done.”

On the very last drive, Turner helped keep the clock running on a power run that carried the Generals farther than they wanted to go.

Turner said he was playing for his uncle, June Bug, who died last week.

“I just knew my team needed me,” he said. “It went through my head like coach was saying all week about will power.”

Leading 30-7 midway through the fourth quarter — thanks to a Flavors 66-yard touchdown catch from Dawe, and a 1-yard scoring rush from Turner — the Cougars faced adversity when Autauga scored two quick TDs. Javon Brown scored from 13 and 1 yards.

Autauga went for an onside kick, which hit EA tight end Jo Nance’s shoulder, but the Cougars recovered with less than 4 minutes to go.

Early in the first quarter, the Generals were driving the field and making good progress, but coughed up the ball.

From there, Dawe hit a 1-yard scoring run; Robinson caught a 51-yard TD pass; and Jason Davis scooped up a fumble and ran it to the house 27 yards to give the Cougars a big advantage.

The Generals answered with a 58-yard touchdown pass from Tripp Carr to James Woods to cut it to 18-7.

EA’s offensive line helped pave the way to a 234-yard effort on the ground for the Cougars. Turner led EA with 122 yards, and McGhee added 102.

Dawe finished the game 3-of-7 for 132 yards, two touchdowns and an interception.

“We got pushed around the last game (in the loss to AA),” he said. “That was embarrassing. We were embarrassed. We told them let’s play with more intestinal fortitude and more fire. They just kept plugging away.”

On Monday, the Cougars went full pads at practice, which isn’t normal.

Flavors said it helped the team prepare for the game.

“We just knew what we had to do to play tough and carry on through the game tonight,” he said.

It’s about a 2-and-a-half-hour drive back to Canoe, and Flavors said the Cougars are going to do one thing all the way back home — party.