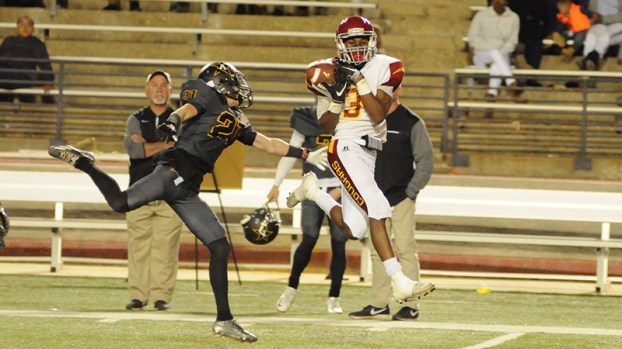 Flavors is ASWA Back of Year finalist

Escambia Academy’s Fred Flavors is a finalist for the Alabama Sports Writers Association’s AISA Back of the Year.

Flavors is one of three finalists for the honor, and is in the running for Mr. Football, which will be announced at a banquet on Jan. 17 at 11:30 a.m.

Picked as an athlete, Flavors finished EA’s state championship season with 376 yards rushing on 37 carries and scored six touchdowns. In the air, he caught 18 passes for 514 yards and five touchdowns.

During the state championship game, Flavors caught a 66-yard touchdown pass in the fourth quarter.

This is the third year in a row that an EA athlete is up for the ASWA honor.

The other AISA finalists include:

The 48 finalists were chosen by a panel of prep writers from around the state at the ASWA’s All-State football meeting earlier this month. They are also finalists for the state’s Mr. Football award, which will be presented at the ASWA’s annual Player of the Year Luncheon in Montgomery on Jan. 17.

The other finalists include:

ASWA Player of the Year finalists