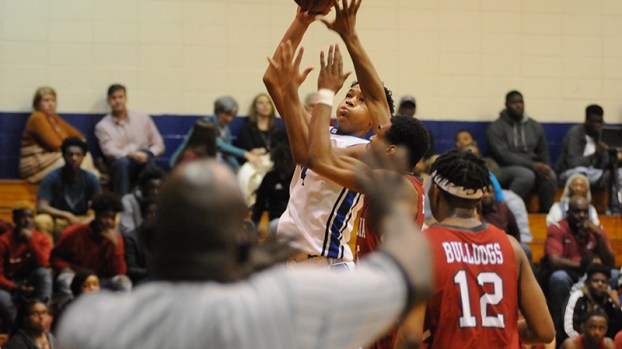 The Blue Devils made 9-of-13 free throws in the last 4 minutes, 16 seconds of the game. Lue Wiliams made 6-of-8 down the stretch.

The ending of tonight’s game wasn’t indicative of the start.

ECHS ran out to a 11-2 lead in the first period and was in full control of the game.

Andalusia countered the rest of the first half with a 20-11 run to tie the game at 22-22 at halftime. The Blue Devils led 36-30 going into the fourth period, but AHS went on a 6-0 run to start the fourth, thanks to an Anderson jumper and a RJ Drish turn-around layup at the basket.

Anderson and Drish’s attack of the basket was a perfect example of what the Bulldogs (18-4) did on their run in the first half.

Williams then hit four-straight free throws to give the Blue Devils a 44-41 lead.

Off of the inbound play after an ECHS timeout, Andalusia went east to west, where Trey Wilkerson converted on a slam dunk with 56 seconds left. ECHS led 44-43.

Williams then missed two free throws with 43 seconds left, and Anderson made a pair on a one-and-one opportunity.

After an ECHS timeout, Williams was fouled, made the two free throws to go ahead 46-45 with 14.3 seconds left.

Brown and Jordaun Patterson iced the game with one each from the foul line.

Andalusia tried for a last-second shot, but it bounced out.

“It was a good game. Andalusia’s got a good team. We battled,” Jackson said. “In the stretch, we made free throws.”

Brown led ECHS with 13 points; Davison had 11 points; and Williams chipped in 10 points.

In girls action, the Lady Blue Devils squeaked by 40-35 thanks to a 9-1 run in the fourth period.

S. Thomas and A. Crittenden led AHS with 12 points each.