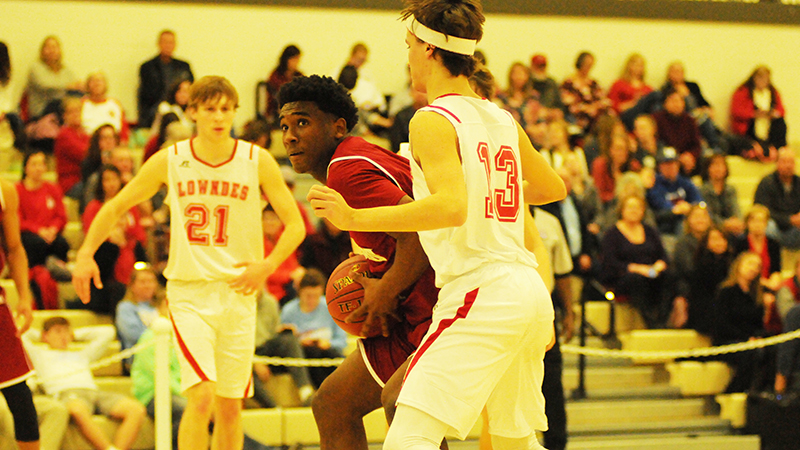 Four Escambia Academy basketball players finished in double figures as the Cougars rolled to a 83-42 victory over Lowndes Academy in the quarterfinals of the AISA Class 2A Elite 8 Tournament tonight in the Multiplex at the Cramton Bowl in Montgomery.

Ti Taylor led EA with 20 points; Neikel Robinson contributed with 19; and MJ Jones and Fred Flavors had scored 13 each in the win.

With the victory, the Cougars advance to play Pickens Academy in the Final Four on Friday at 10:30 a.m.

During the third period, EA outscored LA 23-12 and got into a groove of forcing turnovers and controlling the full-court press.

EA basketball coach James Lee said the boys regained their composure and played well on the floor during the third period, which included many fast-break buckets off of steals and a full-court press that turned the tide.

“We had a good halftime speech,” Lee said.

Lee said free throw shooting wasn’t on par like it should be, and there were a lot of points left on the court.

“If we shoot 83 points on Friday, then I’m confident we’ll move on to the finals,” he said.

Lee said he’s not too worried about the 10:30 start time as the Cougars have played that early in the day a couple times already this season.
In the first period, EA led 12-11 with 2:56 left, and then went on a 7-0 run to finish out the opener.

The scoring kept coming for EA as Jace Daniels grabbed a rebound and a putback to increase the lead to 21-12.

LA answered every time it got a chance, but the Cougars didn’t fall back in the first half.

Louie Turner fought for a basket and a 23-15 lead, and Fred Flavors and Neikel Robinson made one each from the line. Robinson drained two 3-pointers during the first of the first half to widen the lead.

Ti Taylor made a field goal, and MJ Jones found Robinson low for an easy bucket.

EA’s passing was a big key to victory, Lee said.

Even with a big lead, the Cougars didn’t let up for the rest of the game.