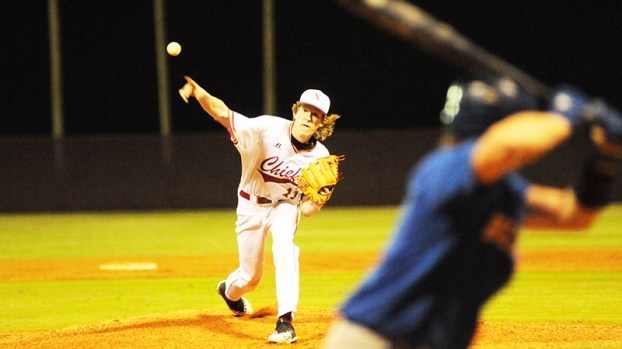 Northview’s Trevor Singleton put together a solid effort on the mound Feb. 23, but the Chiefs fell 3-1 to Freeport in a district game at home.

Singleton gave up two earned runs in 5.2 innings of work. Seth Killam came in in relief, and gave up zero earned runs.

“Our pitching and defense was sound all night,” NHS baseball coach Jeremy Greenwell said. “I have to do a better job getting the players ready to play games. We had several mental errors on the bases, and it’s my fault for not preparing them.

“We will fix it, and we will continue to progress throughout the season,” he said.

The game was scoreless until the top of the fifth inning.

Freeport’s Case Woodard hit a two-run single, and advanced to second on a throw home.

A balk by Killam in the top of the sixth sent Freeport’s third run home.

NHS didn’t give up easy in the game as the Chiefs had bases loaded in the bottom of the seventh inning with one out.

Killam then hit a fly out to score a runner from third, but FHS got a force out at second to end the game.

Greenwell said the game was a good home opener for the team.

“It was a great home opener atmosphere Friday night,” he said. “We have great team chemistry this year, and we will bounce back. I expect good things from us this year.”

GETTING FIT IN ATMORE