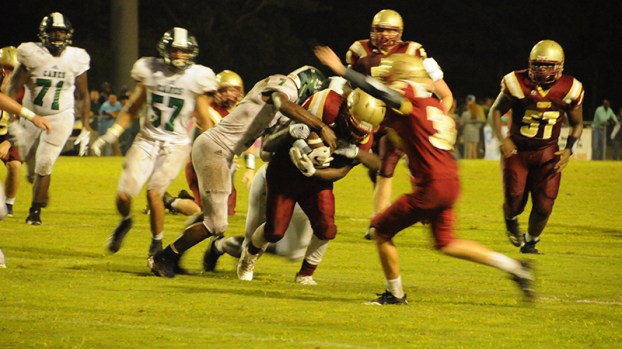 Flomaton’s Daquan Johnson accounted for five touchdowns to help lead the Hurricanes to a 41-20 victory over Northview, Fla. tonight in Bratt.

Johnson scored four rushing touchdowns from 7, 1, 24 and 16 yards, and threw for another in the win that put FHS at 2-0 on the season.

From the start, the Canes had control of the game, scoring within the first 4 minutes of play.

FHS head football coach Doug Vickery said the players’ physical style of play was a big key in the win.

“We just worked so hard back in the offseason and in the winter workouts,” Vickery said. “I just felt good about it. Going into the game, you’re always worried. Playing on the road, it was wet and it had been raining. It did effect us.”
Johnson scored his first touchdown with 8:01 left in the first quarter after setting up the score with a 15-yard pass to Da’Shun Odom.

Northview, who never quit during the game, answered with a eight-play drive that was eclipsed by a 53-yard touchdown rush from Aunterio Minor, who ran through a pile of Canes to his pay dirt.

Down a score, FHS put together a long drive and went ahead 12-7 after Johnson’s second TD in the second quarter.

A short time later, Johnson added his third score and with the 2-point conversion, the Canes led 20-7 with 2:41 left in the first half.

Flomaton’s adjustments from halftime included making sure the run game is prevalent.

Vickery said his assistant coaches made adjustments on the offensive line.

One of the Chiefs’ strengths during the game was their passing game.

Seth Killam found Adam Aliff early in the third quarter for an 83-yard touchdown strike to cut the lead to one score.

However, FHS answered back with a scoring drive of its own.

“We just couldn’t get back to within a score,” NHS head football coach Derek Marshman said. “Tonight, the better team won. We didn’t execute well enough. We were there. We just didn’t tackle well enough.”
Johnson’s throwing touchdown came with 7:26 left in the game on a 41-yarder to Quincie McCall, who was a favorite target during the contest.

NHS didn’t give up late as Killam found Trent Kite Jr. for a 10-yard score.

Next week, Flomaton has an open date, while Northview hosts South Walton.