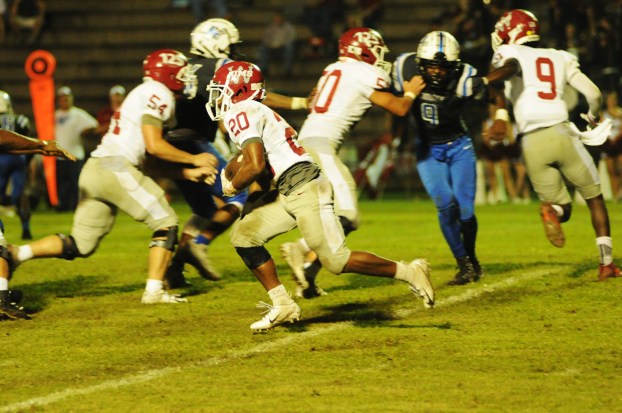 UMS-Wright’s Symon Smith rushed for 157 yards on 13 carries and two touchdowns, and Edwin White accounted for two scores to help lead the top-ranked Bulldogs to a 35-0 region victory over Escambia County tonight in Atmore.

ECHS had the time of possession advantage in the first half, holding the ball for 19 minutes, and 22 seconds.

UMS only needed three possessions to go up by two touchdowns at the break.

Smith’s first touchdown was from 14 yards and 2:57 left in the first quarter. Then White caught a beautiful 55-yard strike from Skipper Snypes with 2:58 left in the second quarter.

After the break, the Bulldogs took advantage on the opening kick off in the third as White returned it for an 80-yard score.

“We had a good first half,” ECHS head football coach Rico Jackson said. “I think the kick off return (White) broke our backs at the start of the second half. They had some big plays, and we didn’t limit the big plays.”

Smith then went on to score on UMS’s next offensive possession from 4 yards, and Jaiden Rollins hit pay dirt early in the fourth.

From here, the Blue Devils visit Williamson in region action next Thursday night.

Jackson said it’s a must win game next week.

Jackson said he wants the boys to finish strong.