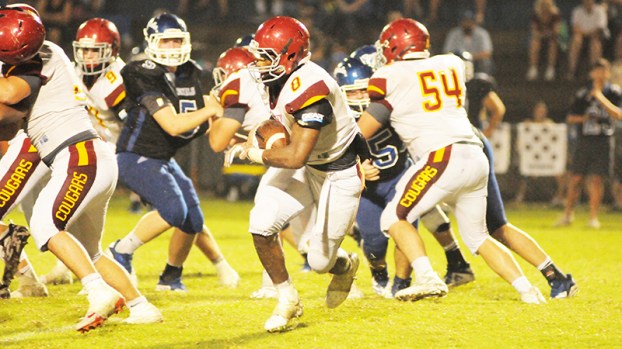 EA’s McGhee, Davis have huge impact on gridiron for Cougars

They set a tone each week, and play their game.

Escambia Academy running back Patrick McGhee and linebacker/fullback Jabo Davis make their presence known each week on the gridiron.

From an early age, Davis has played with an aggressiveness that translates well as he’s racked up 76 tackles so far this season. McGhee has compiled 1,891 yards rushing and scored 29 touchdowns.

“It’s always been like that,” Davis said about his physicality. “I’ve always wrestled with my brothers. I’ve got 4-H cows that I mess with. It’s always been tough I guess.”

Early in games when the Cougars need a touchdown, McGhee’s there. The senior running back said it’s all about not being afraid of anybody.

“I know what my job is and what I need to do to get the job done,” McGhee said. “Coach Marty (Long) used to always tell me when my time comes, I need to take advantage of it.”

Both have helped lead EA to a 8-2 season so far. The Cougars will face Coosa Valley this Friday in the first round of the AISA Class 2A state playoffs.

Both said that it’s been a year of ups and downs, but the team as a whole is starting to click together.

McGhee said he believes everything started clicking for them during last week’s 48-13 victory over Fort Dale.

“I think we started clicking a little bit and rolling with it in the last game when we started running the ball comfortably,” he said. “Chase (Bell) and Lolo (Shannon Wheat) are stepping up and catching and running for a lot of yards.”

When asked what the keys have been for each this season, both had similar answers.

“For me as a player, it’s all about reading the offensive line and seeing how other linebackers work on the field,” McGhee said. “That has a big old impact on how I run the ball. I trust my fullback (Davis).”

For Davis, it’s all about making sure he does a good job of tackling and blocking because everything will take care of itself, notably stopping the opponent’s offense and McGhee getting touchdowns.

As far as personal goals, McGhee said he wants to reach 2,000 yards, while Davis said he is aiming for the 100-tackle mark.

Loud. Fun. Entertaining. Those are a few words that describe the White Family, who recently auditioned for a spot to... read more