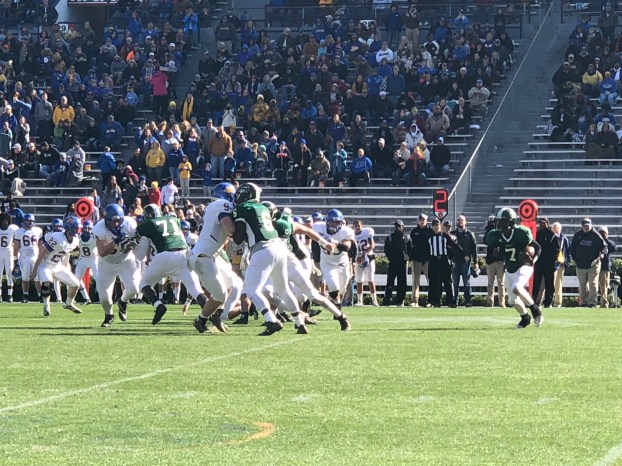 The hurricane may never stop.

The win is the school’s first football title in school history, and came after a turnover-prone game that was led by an efficient offense and key plays on special teams.

Flomaton quarterback Daquan Johnson rushed for 100 yards on 43 carries and scored two touchdowns to lead the Hurricanes. Johnson’s scores in with 50 seconds left in the third quarter and 8 minutes to go in the fourth, pushed his team ahead down 12-9 after the Bulldogs opened the second half with a 75-yard touchdown run.

Johnson was named the most valuable player.

Trailing 6-3 in the second quarter, Johnson found Sam Smith for a 14-yard pass, and at the break, FHS led 9-6.

Da’Shun Odom got the Hurricanes on the board in the first quarter with a 25-yard field goal.

In a game riddled with turnovers, Flomaton forced five turnovers on defense, compared to Piedmont’s zero. FHS scored 16 points off of the turnovers in the game.

Defensively, the Bulldogs outgained the Hurricanes 81-42 in total tackles. Johnson led with 6 tackles. Devonta Bradley, Evan Tatum and Micah Boyette had 5 each.

Flomaton outgained Piedmont 324-218 in total offense for the day.

In the red zone, the Hurricanes went 4-of-5.