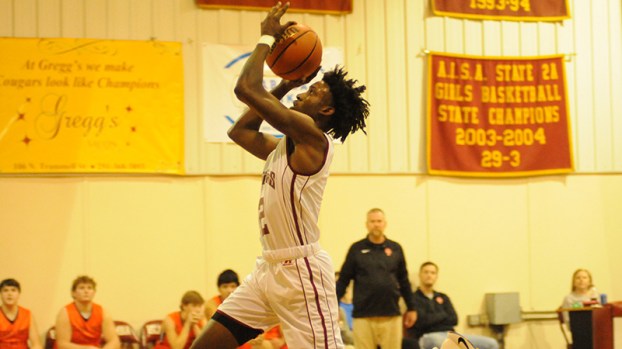 Escambia Academy’s Tiquale Taylor scored 37 points to help lead the Cougars to a 64-56 region victory over Clarke Prep on Jan. 10.

Taylor had a steady flow of shooting throughout the first three periods of the game. He scored 24 points in the first half as the Cougars led 37-23 at the break.

“He plays hard,” EA coach James Smith said about Taylor. “All the guys do.”

With a comfortable 55-32 lead going into the third period, Smith allowed his younger bunch to get some playing time to help release the nerves.

The game got to 57-50 with time dwindling away, but the Cougars’ starters came back in and took over as T.J. Riley got a rebound and putback to go, and Ty’Rese Smith went end to end for an easy bucket.

“The only reason they even remotely got close to us is because I gave the guys who haven’t played or don’t play much some experience to help release the nerves,” Smiths said. “In turn, that 23-point lead ended up going away. That’s just how it goes.”

Smith said he thought Riley did well in his 7-point effort, and Bryant Quimby played hard once again.

Additionally, Smith said it’s been good to have Jayson Helton below the basket so he can get some rebounds.

“That’s exactly what he’s been doing,” he said of Helton and the rebounds. “He’s actually done really well for us.”