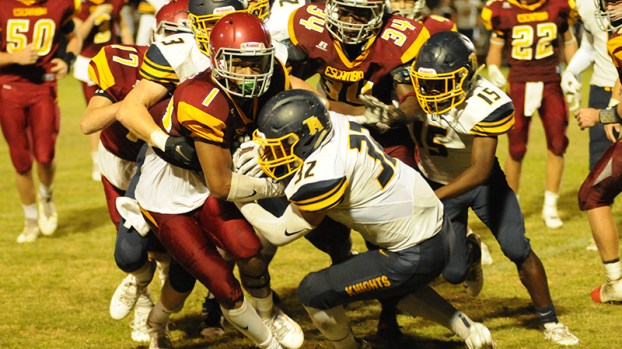 Cougars fall to 0-2 on the season

Tuscaloosa Academy scored 13 unanswered points with more than 8 minutes to go in the fourth quarter to down No. 6 Escambia Academy 20-19 tonight at Bachelor Field in Canoe.

Knights quarterback Mayes White broke around the right end for a 48-yarder, and running back Houston Evans answered one possession later with a 42-yard gain to go ahead with 2:54 left in the game.

The Cougars and Knights then traded possessions, and behind sophomore quarterback Landon Sims, EA drove the field 42 yards to set up a 41-yard field goal try on fourth down with 9.2 seconds left. Senior kicker Orlando Medina, who was well within range, missed the try right .

“We didn’t have a good snap, and we didn’t give him a good shot at making it,” Fountain said. “Like I told them after the game — all throughout the game, we had so many little mistakes. We didn’t tackle well. We had missed opportunities.

“When you play good teams, and you miss opportunities, you get beat,” he said.

Earlier in the fourth quarter, EA senior running back Shannon Wheat ran the ball 65 yards to put the Cougars ahead 19-7 with the made extra point by Medina.

Late in the third quarter, Medina helped EA increase its narrow lead with a 28-yard field goal with less than a minute left. His try put the Cougars ahead 12-7.

Fountain noted that Wheat had some great runs, adding that the boys never quit in spite of the score.

“That’s one thing about us, we seem to not be a quitting team,” he said. “We keep fighting and plugging all the way through.

“We’ve got to continue to fight and move on,” he said.

Right before halftime, White got pressure deep in the end zone and tried for a throw, but was called for intentional grounding, garnering EA a safety with 1:02 left.

TA tied the game up with 6:30 left in the second quarter on a White 1-yard rush; and EA drew first blood on a 67-yard scamper from Wheat in the first quarter.