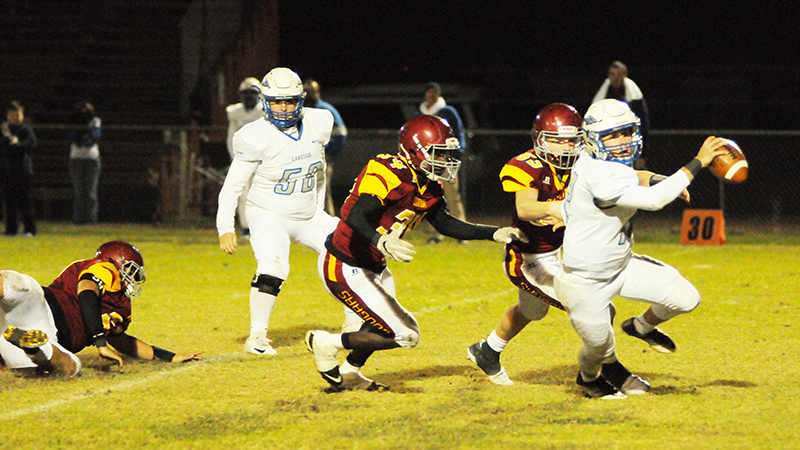 Escambia Academy’s defense held Lakeside Academy to 99 yards of offense and the Cougars earned a 49-0 victory in the AISA’s Class 2A quarterfinal tonight in Canoe.

Shannon Wheat scored two touchdowns; Ty Williams had a reception for a touchdown, which made for having a receiving score five straight games in a row; Daughtry McGhee returned an interception for a score; and Chase Bell added a fumble recovery.

The Cougars got off to a hot start, scoring early in the first quarter. The score remained 7-0 until the second, when quarterback Landon Sims took it in himself from the 1 to make it 14-0 with more than 8 minutes left in the first half.

McGhee added a 22-yard scoring rush with 5:14 left in the second quarter.

EA head football coach Hugh Fountain said the boys did a good job of coming out and taking care of business from the jump.

“We had a few sluggish moments in the first quarter, but we just got tuned in on them, and played good football,” he said.

For the game, the Cougars ran 35 plays for 336 yards of offense.

On defense, this was the third shutout for EA this season.

Northview’s Jaheem Durant scored a touchdown on offense, defense and special teams to help lead the Chiefs to a 41-21 victory over Jay in the FHSAA’s Class 1A regional quarterfinal in Bratt.

The Chiefs ran off to a sloppy start in the first half, giving up four turnovers, but had five for the game.

“It was sloppy,” NHS head football coach Derek Marshman said. “Give credit to Jay. They showed a lot of character. We had just beat them by 33 (40-7) last week. It would’ve been easy for them to lay down, but they fought hard.”

Marshman said the players were resilient as they fought passed the early mistakes in the first half.

The coach said he felt his defense blocked the perimeter well, and the offensive line did  great job.

Next week, the Chiefs visit Vernon in the regional semifinals. Kick off is at 7:30 p.m. 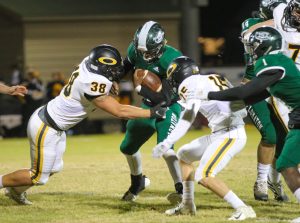 Flomaton head football coach Doug Vickery the boys dominated from start to finish, and that it’s good to continue playing.

The Canes face St. James next week at home in the second round of Class 3A state playoffs.