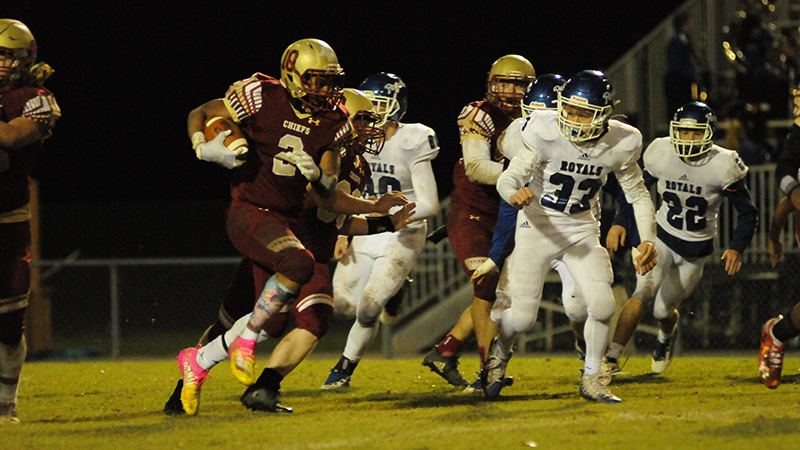 Northview will have its hands full this Friday as the Chiefs visit Vernon, Fla. in the Class 1A state regional semifinal, head football coach Derek Marshman said.

Last week, the Chiefs defeated Jay, Fla. 41-21 behind a stellar performance from Jaheem Durant, who scored a touchdown on all three phases of the game. Additional performance leaders included Damerion Findley with 8 carries for 115 yards and a touchdown; Trent Peebles with 108 yards on 16 carries; and Jayden Jackson with 79 yards on 11 carries and a touchdown. Jacob Hawkins added 7 tackles, 3.5 tackles for a loss (TFL) and a sack; Jamarcus Jefferson had 15 tackles, two TFLs and a sack; and Findley had 7 tackles, 2 TFLs, a sack and a fumble recovery. Keyshawn Breedlove added 2 tackles, three pass break ups and an interception.

This week, NHS will be facing a Vernon team that’s compiled a 7-3 record with its only losses against Crestview, Taylor County and Blountstown.

Marshman said this week’s game will be a challenge.

“When you flip on film, they scare you to death because they have tons and tons of playmakers all over the field and on both sides of the ball.

“They have four game changers, for certain,” he said. “Honestly, they’re the best collection of talent we’ve played all year.”

“A dual threat, and he’s done a good job of managing their offense,” Marshman said about Bush. “You can tell he’s smart with the ball. He delivers the ball to the playmakers. He can beat you with his arms and legs.”

In the back field, running back K’wan Powell, has amassed 1,507 yards on 155 carries and scored 23 touchdowns.

Marshman said Powell will be the best player the Chiefs will see all season long.

“He’s on a different level than the other three,” Marshman said. “There’s a reason Florida, FSU, LSU and other D-1s are offering him. He’s only a junior. He’s a really hard runner.”

Marshman said Powell has thick legs and a lot of power and break away speed, adding that he can catch screens and passes out of the back field.

“He’s a big time play maker on the perimeter,” the coach said. “He makes you nervous every time. He’s aggressive, and plays both sides of the ball. He has a big body, 6-foot-3, 190-ish., and a Division 1 type player. He runs great routes and soft hands.”

This season, D. Powell has racked up 510 yards on 21 receptions and six touchdowns.

Marshman said another kid, Will Dempsey Jr., a nose guard is also a threat.

“He’s 1A and 1B as far as the running back,” he said. “He’s on that type of level. He’s the best defensive linemen I‘ve seen. He’s a special type of player.”

While looks good based on those few players, Marshman said he feels like the players are confident in their abilities, too.

“We’re not going to go into the game and say, ‘there’s now way we can do this.’ We’re going to do what we do and do it the best way we can. We feel like we can counter them as well. They have a good running back, we feel like we have a stable of running backs. They have a good defensive lineman, and we feel like we have some good size there, too. We feel very confident with our kids.”
Marshman said creating and eliminating turnovers and eliminating penalties are two big keys for the Chiefs this week.

He added that this week’s game will have a quality atmosphere.

“This is why the kids work during the off season,” Marshman said. “This is two good football teams playing each other. Both have played good teams all year.

“Like I told them last week, stats and styles are irrelevant, but the only stat is 1-0,” he said. “We set weekly goals every week, and have done a good job of setting that the last two months. Our goal this week is to be 1-0.”