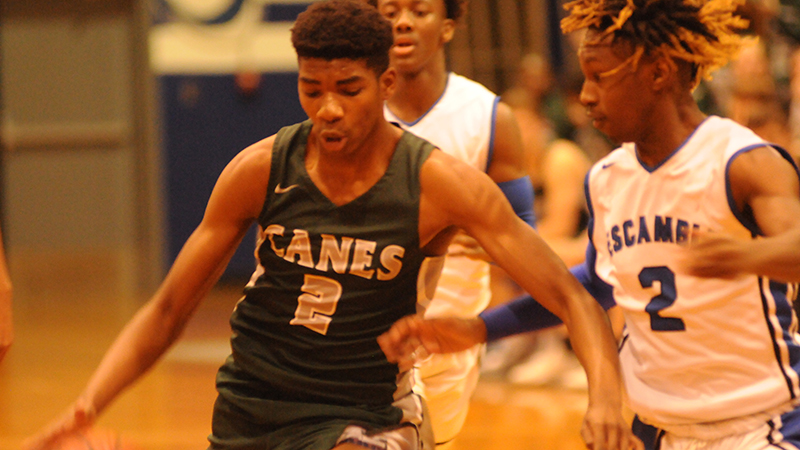 Flomaton led 13-1 in the first period, and held on late to top Escambia County 50-47 in its second game of the county tournament tonight in Atmore.

ECHS stiffened its defense in the third period, but held close, outscoring FHS 11-10 to trail 36-31 going into the fourth.

Allen Patterson began the fourth on a drive to the basket to cut it to three. Trevon Lambert then got a steal and converted to cut the lead to 36-35.

Jackson Steele added a put back off a rebound, but the Blue Devils kept fighting back to keep it close. Patterson found Lambert again soon after to make it 38-37. Patterson tied the game at 38-all on the back end of a pair with 4:08 left.

Flomaton’s Jackson Dullard got a close jumper to increase the Canes’ lead to 44-40. Lambert answered with a jumper, and Patterson found scoring room after a turnover to tie the game again.

Jate’vius Franklin then got a jumper to give FHS a 46-44 lead.

ECHS tried a 3-point shot play, but missed and put Ivan Glenn on the line for a one-and-one. Glenn made both with 21.2 seconds left.

Escambia County’s Jalen Barnes got a rebound and cutback, and made the front-end of a pair to get it to 48-47.

Franklin then made a pair of free throws with 6.5 seconds left, and ECHS tried to win it.

Franklin led FHS with 20 points, and Dullard contributed with 11.

NWE Chiefs to play in Redzone Games at Falcons…