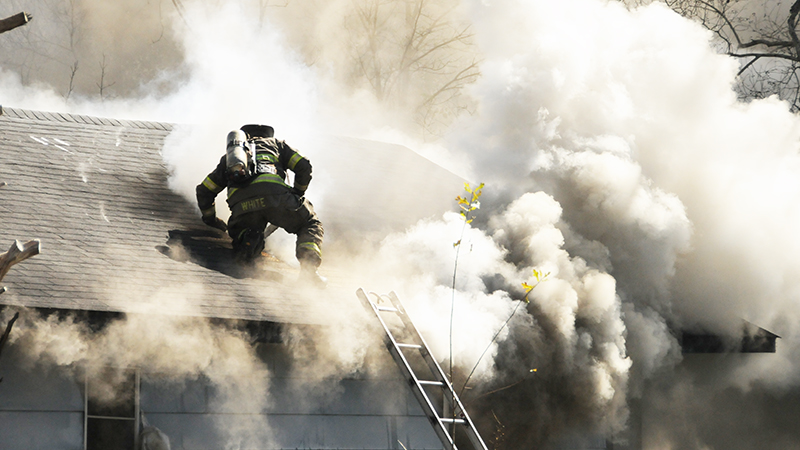 Atmore firefighters had to cut a hole in the roof to allow heat and smoke to escape from the residence. | Andrew Garner/Atmore Advance

A fire destroyed a Montgomery Street residence earlier this afternoon, according to officials.

Atmore Fire Chief Ronald Peebles said an electrical short in the wiring of the attic of the residence was the cause of the fire.

Peebles said the AFD received the fire call at 11:41 a.m. Friday, and was on scene 4 minutes later.

Peebles confirmed today that the house is a total loss.

“The main problem was is that it was in the attic, and we had no attic access,” the chief said. “We literally had to get on the roof to cut some attic access through the roof and through the gable end.”

Peebles said firefighters attacked the house from the inside and outside. Additionally, he said he blew the horn three times to signal firefighters to get out of the structure.

“When you hear three horns blast on the engine, it’s time to clear the building,” he said. “One of my jobs is, not only to fight fires, but to see what’s going on. I noticed that the roof started to sag. Therefore, I felt there was a collapse about to happen.”

Peebles said the fire was one of the hottest he’s experienced in a while.

“There was so much heat trapped in it,” he said. “The heat was banking down from the attic, and it had nowhere to go. Once we vented the roof on the gable end, that allowed some of the heat to escape. By automatically venting the roof, it allows the smoke out of the building and gets the heat out of the building.”

Plumes of heat and smoke were scene exiting the puncture in the roof once the hole was created via chainsaw.

Peebles said Poarch Fire Department provided mutual aid, and ASAP Ambulance was on scene checking the firefighters as they exited the residence. Additionally, the Atmore Police Department responded to the scene for traffic control.

The chief said the ambulance crew was on hand for rehab purposes as they checked all vital signs of the firefighters.

“My guys did a heck of a job stopping it under the circumstances,” Peebles said. “When a fire is in the attic, it’s hard to stop it.”

The AFD and other law enforcement personnel cleared the scene at 1:49 p.m.