An Escambia County, Ala. corrections officer was arrested and charged with ethics violations and promoting prison contraband, according to officials. 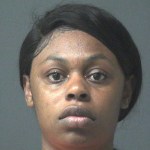 Sheriff Heath Jackson said on Aug. 11, the ECSO investigators along with special agents from the Federal Bureau of Investigations served arrest warrants on Lakerdra Shanta Snowden, who was a corrections officer at the detention center.

“Today’s arrest stems from a joint operation between ECSO and the FBI into the smuggling of contraband into the detention facility,” Jackson said. “Snowden is charged with one count of use of official position for personal gain (ethics violation), and promoting prison contraband I.”

Jackson said Snowden was immediately terminated from her position and is being held without bond pending her appearance in court on Aug. 12, 2020.

This is still an ongoing investigation and more charges are anticipated, he said.

“We will continue to arrest and prosecute anyone who is involved with bringing contraband to the detention facility,” the sheriff said.