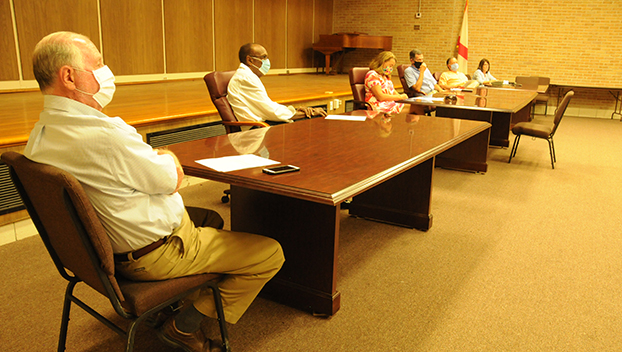 Members of the city of Atmore Industrial Development Board listen during a meeting Monday morning. | Andrew Garner/Atmore Advance

City of Atmore Industrial Development Board officials heard some promising news and updates during their meeting on Aug. 10.

The IDB, which is comprised of community economic leaders, heard about the direction of Coastal Alabama Community College (CACC) and Escambia County High School (ECHS), and an update on Project Nautilis, an agricultural project that would help benefit the city on an economical standpoint.

Principal Amy Cabaniss talked about the early career readiness programs, including the high school’s NAF Academy, which helps students develop skills to get a career in information technology.

At present, the school has 11 students enrolled in the academy with with a mixture of virtual and traditional students.

Cabaniss said the students are taking the intro to information technology class.

“Next year, they will have the second course, and then their junior year will be the third course,” Cabaniss said. “They’ll graduate ready to go into a job or career in information. The same is true with our other career programs.”

Cabaniss aid the same is for the welding and cosmetology programs at the school.

In regard to other career readiness programs, CACC Atmore Campus Director David Lanier spoke about the upgrades the campus has been going through, including the adding of $1.1 million to the machine-tooling program.

Lanier said the local campus is about 95 percent ready for instruction, which begins Aug. 24.

He said the campus will also be more visible from Highway 21 as some 23 trees will be removed.

Lanier also talked about the CNC apprenticeship program, which allows students to work at a local company Mondays, Wednesdays and Fridays for 30 hours a week, and spend the other two days at CACC.

According to Atmore Advance archives, the facility will have a capital investment of over $82 million and will create at least 100 new fulltime jobs. The city, in partnership with the state of Alabama, is trying to land the industry in Atmore and is offering tax abatements and land for the construction of the facility and a railroad spur to service the plant.

Centerfire Economic CEO Jess Nicholas said during the IDB meeting on Aug. 10 that the company is a peanut-shelling business.

“This may not sound like the most high profile industry in the world, but the impact that it’s going to have in the region is very exciting,” Nicholas said. “We’re looking at a company that intends to employ 100-150 people on an average wage of $17 per hour or more. This could invest somewhere beteen $80-90 million of capital expenditures in the county.”

“Phase 1 would be mostly (the construction of the facility) and Phase 2 (is the construction of the adjacent rail transfer yard) – they may come at the same time, dependent on grants,” Nicholas said in a previous story. “The second phase is that the city would construct a transload facility, which would allow trucks and other transportation to put their goods on that rail to send to Mobile or Pensacola (Fla.).”

Nicholas said the transload facility would create a revenue stream for the city.

Nicholas said the revenue generated from the transload facility will come from the loads and parking fees for carts.

Nicholas was asked by the IDB board whether he feels if the facility is coming to Atmore.

Nicholas said the city is the agricultural company’s first choice.

If selected, construction will begin in November with production startint the following December 2021 or January 2022, Nicholas said.

Nicholas added that Gov. Kay Ivey’s office, along with other city and state officials have helped in the effort.