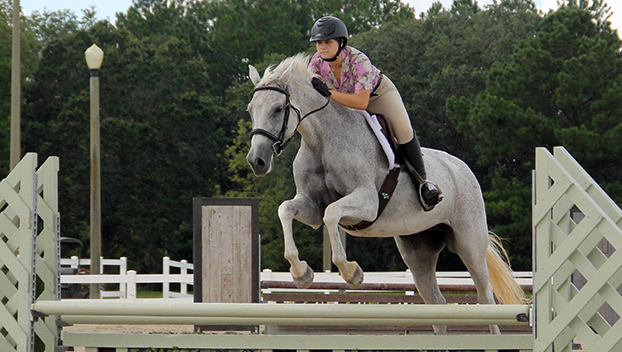 She competed against 13 other riders, and earned a total of 11 ribbons.

During the show, or competition, Bonner had to jump over 2-foot-six-inch high sticks against riders and trainers. Over the course of two days, she had seven courses to jump.

“I feel pretty good honestly,” Bonner said about her run last weekend. “There were things I missed up and could’ve done better on, but overall, I was very pleased with how I performed.”

Soon, Bonner will kick off her competition in the Interscholastic Equestrian Association (IEA), where she will travel and compete against other high school riders across the southeastern United States, according to EA’s Facebook page.

Riding in the is a whole different animal.

“There, she travels on the weekends, and competes all over the southeastern U.S. against meany other girls her age,” McDonald said. “They’re all competiting to be seen because at IEA that’s where your college scholarships are found.”

McDonald said when at IEA competitions, Bonner has no idea what horse she’ll ride.

“Each girl draws a horse from a bag, and she has to ride a foreign horse and saddle, and do everything she would normally do on her own horse and look good doing it,” McDonald said.

There are a lot of unknowns in riding horses at IEA.

“She has to go in and show all of these other riders and trainers what she’s capable of no matter what horse she’s on,” McDonald said.

Luckily, while Bonner said it’s a different skill, it’s something that’s no unfamiliar. When not in school or on the sidelines as a cheerleader, Bonner is breaking horses at her grandmother’s, Patricia Bonner’s, farm.

“I have worked with my personal horse that I show in Pensacola (Fla.),” she said. “I’ve been working with her eight to nine mohts. When you go ot IEA, you have to work with the horse for 5 minutes. They give you at least a cheat sheet about the horse.”

McDonald said the cheat sheet gives tips to the rider about what to use with the horse.

“Then, you get on it and go,” McDonald said.

At IEA competitions, Bonner, who has been competing in IEAs for four years, will compete for invidual points in the over the fences and flat categories. After accruing enough points, she can advance to regionals.

McDonald said during competitions, officials will tell the riders to do different things with the horse, such as trotting, backing up, etc.

“Their goal is to try and get you to mess up,” McDonald said.

McDonald added that if a rider does well on the performance side of things, officials will give them a questionnaire with the same goal.

Bonner has been riding horses since she was 8 years old.

She said she loves riding horses because she connects with the horse.

“It’s having that relationship with another animal and feeling just the rush of being on a horse,” Bonner said. “I love jumping. I just feel free, like I’m flying.”

Bonner will compete in some six more competitions – IEAs and hunter jumper – during the remainder of the current season, which was halted because of the pandemic.

Bonner is the daughter of Gil Bonner and Kyna McDonald; and the granddaughter of the late Bob (Patricia) Bonner.