Escambia Academy’s Landon Sims and Bubba Nettles scored two touchdowns each, and Northview had a strong performance in the second half, but the Cougars held on for a 27-22 win Friday night at Bachelor Field in Canoe.

In the teams’ third meeting, EA and NHS put together a stellar game on a cool night in front of a packed crowd.

The No. 4 Cougars (5-1) took an early lead in the first half, and led 7-0 at the break before adding three key touchdowns in the final 24 minutes along with some big defensive stops. But, the Chiefs (1-1) took to the air with two touchdowns and added a score on the ground to keep the game close.

“In the second half, we let them get loose,” EA head football coach Hugh Fountain said. “Those two passing plays we just missed the coverage. On the run, we didn’t fill the gaps. On their touchdowns, they went over 50 yards on all three of them. That hurt us.

“I felt like obviously, (EA quarterback) Landon (Sims) was a weapon in the game. He was a difference maker in the game,” he said. “He made a couple of scramble plays that were pretty good.”

Trailing 14-7 with 2:46 left in the third quarter, Sims rushed the ball 11 yards for a score to even the game. Earlier in the contest, Sims converted a 1-yard touchdown run midway through the first quarter after a long opening possession that saw a critical catch and run from Randall Bonds.

Being that Friday was the Chiefs’ second game of the season, the Bratt, Fla. team took advantage of quick throws in the air.

Chiefs’ quarterback Kaden Odom connected with Logan Bryan on a 64-yard pass with 11:03 in the third, and added a 81-yard touchdown pass to Jayden Jackson less than 4 minutes later to give his team a 14-7 advantage with a 2-point conversion.

After Sims tied the game at 14-all, the Cougars regained possession on an interception catch from Daughtry McGhee.

Nettles scored his first touchdown from 9 yards with 10.2 seconds left in the third.

Not even 32 seconds later on the game clock, Jackson was responsible for his second score, a 51-yard run to start the fourth quarter. He converted the 2-point conversion to give the Chiefs a 22-21 lead.

A short time later, Nettles scored his second touchdown on a 33-yard route, and because of an illegal procedure penalty, the Cougars couldn’t convert the extra-point attempt.

EA, whose defense dominated the game, came up with two sacks on the Chiefs’ possession, and two interceptions late in the fourth.

Haynes iced the game with 40.8 seconds left on an interception catch.

Late in the game, EA fumbled the ball once to give the Chiefs a fighting chance.

“It was just a back and forth game,” NHS head football coach Wes Summerford said. “I think I could’ve predicted that before hand. It was a great game. It was a great atmosphere. It was bad that we’re on the losing side of it.

“What I’m going to tell these guys is sometimes it’s a blessing,” he said. “You can learn from that. This humbles you. I’ve seen teams rebound. We’re going to try and find out who we are.”

Nettles rushed 152 yards on 21 carries to lead the Cougars, who compiled 432 yards of total offense. 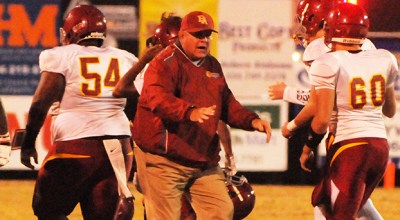 Cougars rise to No. 4 in latest ASWA poll