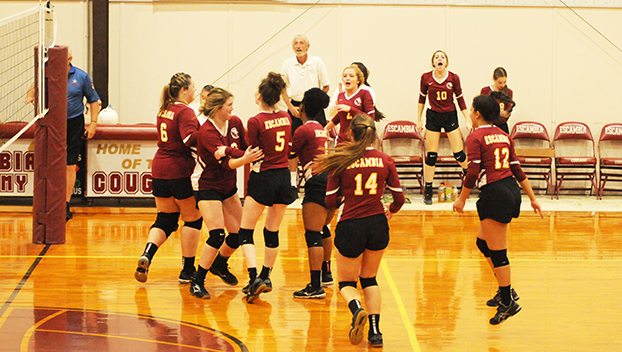 With the victory, the Lady Cougars advance to the regional semifinals, where they’ll face Abbeville on the road tomorrow, Thurs., Oct. 22, at noon.

Head volleyball coach Larry Bonds said the girls put it together in the final set.

“I told them during that third set that we get out of calling the ball,” Bonds said. “In the third set, we gt over confident and lax. When they jumped ahead we called that one timeout. I just told them, ‘look, if you want to win this thing, do it here.”

In the third set, Evangel led 16-13, but due to a substitute infraction, lost two points. A little later, the set was tied 19-all, and Evangel took a timeout to regroup.

Evangel went on to take a 23-21 lead and never gave it up in the third-set victory.

However, the Lady Cougars battled back from an early deficit in the deciding fourth set, 5-9, to tie the game up later at 10-all.

“The seniors, all of them, did a great job,” Bonds said. “I’m just especially proud of the four seniors (Patel, Conway, Turner and Gabby Williams), and the leadership they showed.”

Bonds said Tuesday’s match was the first this season he had everybody back on the team healthy.

“We’ve had some of them hurt all year,” he said. “These younger players, like AC (Robinson), Jane (Vermeulen) and Tava (Johnson), all of them have stepped up through the season.”