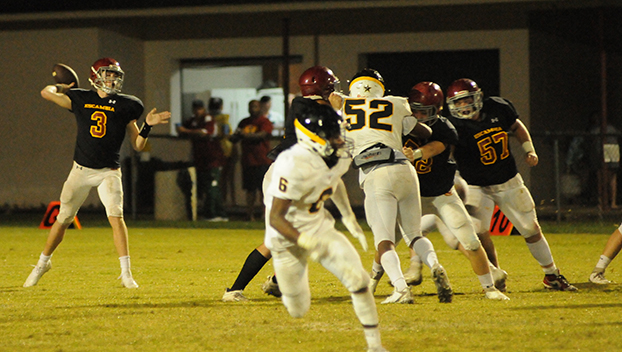 Escambia Academy quarterback Landon Sims gets set for a play and recognizes an opportunity.

During last week’s 33-12 victory over then No. 2 Bessemer Academy, Sims checked the defense and called a different offensive play.

Bubba Nettles then broke the line, ran left for 60 yards and changed the game’s momentum.

Cougars head football coach Hugh Fountain said the win over Bessemer was a prime example of how Sims used his experience in the game.

The Cougars then went on to score a touchdown to increase their lead.

Since Sims began as the starter for EA, the junior has progressed throughout each season.

Fountain said Sims has gotten better and better with each passing game.

“I think every game Landon’s played for us, since he’s been here – especially looking at the quarterback part of it – he’s gotten better and better,” Fountain said. “It really, to me, was kind of on show with that game Friday night. I’ve always said that he’s the most important cog in the wheel. We do a lot of stuff on offense, which is essential for him to remember because he gets people in the right place.”

Sims, who said he gets his athletic ability from his parents, Mike and Fawn, said his progression is tied to working hard each week.

Sims and the rest of the Cougars will face Springwood this Friday in the first round of the AISA Class 2A state playoffs.

When asked about the playoffs, Sims had one reply.

“Just making it to the state (championship) really,” Sims said. “It’s just one game at a time and getting ready to get to state.”

Sims said his previous experience in the postseason will aid him this year. In 2019, EA lost to Autauga Academy in the state championship game.

“It’s helped me because we lost last year,” he said. “I feel like I’ll be ready this coming year and be better in the playoffs.”