Norman Michael Williams’ life began on Aug. 28, 1954. He was the son of Earl Williams and Narvia Williams of Bromley. 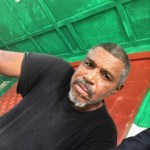 While in Bromley, he accepted eternal life with St. John’s Catholic Church.

A celebration services will be held this Sat., Nov. 14, 2020, at noon from the Cross Road Volunteer Fire Department in Bay Minette with Bishop Bernard Bishop presiding and Elder Lester Perdue as eulogist.

Interment will be in Williams Family Cemetery in Brolmey.

Mayberry Funeral Home in Atmore is in charge of arrangements.