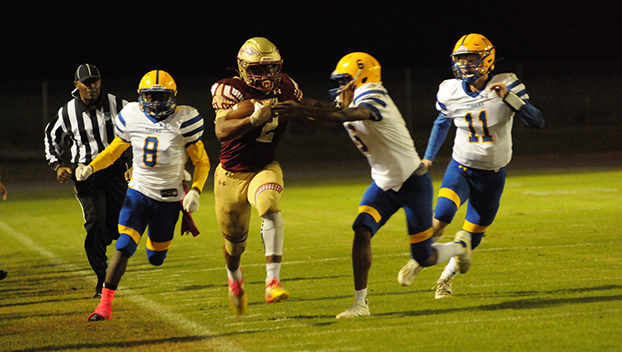 In preparation for the Jay, Fla. game earlier this season, Northview turned a corner at practice.

Since then, the Chiefs have kept the momentum going, winning five straight heading into the playoffs, where they’ll face Chipley in the Class 1A regional quarterfinals tomorrow night.

Head football coach Wes Summerford said since the first Jay game, the team has focused on taking the necessary steps to get better.

“I think they realize what’s at stake and things like that,” Summerford said. “We preach to them all the time, don’t worry about who lines up across from you, worry about us.”

Summerford said he’s reminded the players that the worst thing that can happen to the team is sitting at home the next week, saying they are better than that team.

“I told them to not take anything for granted,” he said. “And don’t let that happen to us. That’s the last thing we want to do.”

Summerford said this week is a first for him as he’s never faced a regular-season opponent twice in one year, especially during the postseason.

The coach said the goal is still the same as it was during the regular season – to get better each week.

“In the playoffs, you can’t look ahead,” Summerford said. “Anything can happen in the playoffs. It happens every year.

“I’m sure they’ll (Chipley) have some wrinkles,” he said. “They’ve seen what we do. If anybody has an advantage, it’s them. We just got to prepare that much harder, and make sure we’re all on the little things.”

Summerford said practices as of late have allowed coaches to look at things that can be improved. For example, now that the junior varsity season is over, the practice periods are strictly focusing on varsity.

“I told the coaches let’s not waste it,” he said. “We’ve got more eyes watching them, whether it’s during an offensive or defensive period, more eyes are looking at it.”

Summerford said some defensive keys this week is making sure they stop the run, and to cover on third down.

Summerford said he’s excited for the players because the state of Florida has included every team in the postseason.

“Especially those teams that haven’t been in the playoffs,” he said. “That’s a unique situation. We may seem some cindarella stories. I’m proud of our guys, they’re working their butts off. This is now the point in the season where you want to get.”