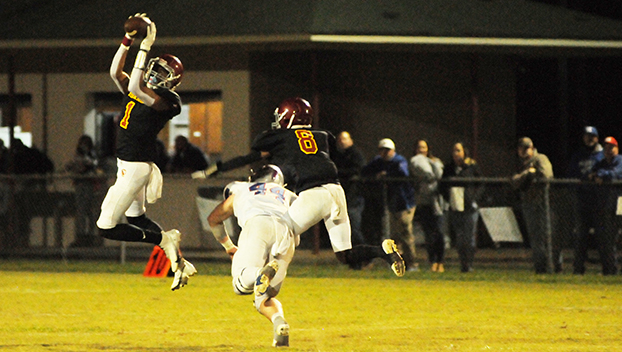 Escambia Academy battled through the 2020 season, and will face No. 6 Chambers Academy this Friday in the AISA Class 2A state championship game at the Cramton Bowl in Montgomery.

The Cougars defeated Macon-East 54-13 in the state semifinals on Nov. 13. Chambers defeated Edgewood 51-20.

This year’s state championship appearance marks EA’s fifth straight, and sixth out of the last seven seasons. This is Chambers’ sixth straight appearance in the title game, but its first as a Class 2A team. The last time EA played Chambers was in 1999, a 42-6 win by the Rebels.

Fountain said the team understands what’s at stake in this game.

“The greatest thing about the state championship game is that everything you’ve done all season conglomerates into this one ball game,” he said. “The team that plays the best on that day is going to be the state champion no matter what.”

Fountain said Allen is the guy that makes the offense roll.

“No. 1 (Trammel) and No. 13 (Benbrook) are good, too,” he said. “They’re like us. We have outstanding players in all positions, but it takes the whole team. Their offensive line is good.

“We’re the best 2A teams, and we play each other this week,” he said. “That’s good because you get to go on the field and find out who is the best team. We have a lot of respect for their program.”

Both teams share similar facts as both programs’ head coaches have sons playing on their respective teams. Fountain’s son, Troy, is a senior and is the center; and Chambers head football coach Jason Allen’s son is Payton.

Common opponents between the two are Springwood, Macon-East and Autauga Academy. Both won each contest.

Fountain said a big key for the game is limiting turnovers.

“If you look at the game Friday night, turnovers killed Macon-East,” Fountain said. “Turnovers are huge in the championship game.

“The last time we won (the championship) in 2017, we didn’t turn the ball over and they (Autauga Academy) did,” he said.