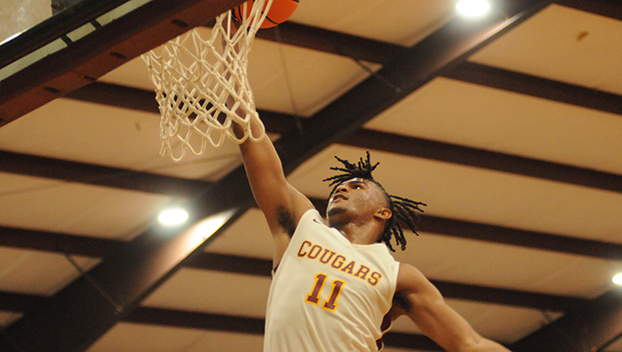 Escambia Academy’s Malaki Hanes made an eventual game-winning free throw with 0.2 seconds left and Bubble Nettles scored 17 points to help lead the Cougars to a 42-41 victory over Oak Park on senior night tonight in Canoe.

Hanes scored four points, all in the final period of play, and his last two with less than 20 seconds lef.

The Spartans got the ball back with 18.8 seconds left, but EA came up with a stop. Hanes was fouled a short time later. He missed his first free throw, but drained the second for the eventual victory.

The Cougars and Spartans battled in a low-scoring affair. Both were tied at 27-all going into the fourth period. Oak Park led 19-18 at halftime.

EA coach Willie White Jr. said it’s a win, but “that’s about all I can say.”

“We played so terrible,” White said, adding that pour shot selection was prevalent.

The game went back and forth throughout the second half.

EA came up with some key stops, and battled from behind early in the third. Daughtry McGhee hit a free throw to stop a short Spartan run with 4:43 left in the third.

Landon Sims added a free throw a short time later and Oak Park answered with a layup from JD Moore.

Nettles’ rebound and putback a short time later cut the Spartans’ lead to 25-22.

Sims then made a pair for a 27-24 score, and Nettles added a three-point play with 0.2 left in the third to tie the game.

Nettles added a jumper to go, and McGhee found Chasten Helton for a basket to give EA the lead at 35-33. Sims then added a steal on the defensive end, and finished the drive with an three-point play.

Hanes got a rebound and a layup a short time later, but Isaac Parker banked a 3-pointer to give Oak Park a 41-40 lead with 35.2 seconds left.

EA called a timeout before Hanes made his eventual game-winning shots.

The Cougars will play South Choctaw at home next Tues., Feb. 2, 2021, to earn a chance to play in the Elite 8 in Montgomery. Then, EA’s regular season comes to an end on Friday at Atmore Christian.