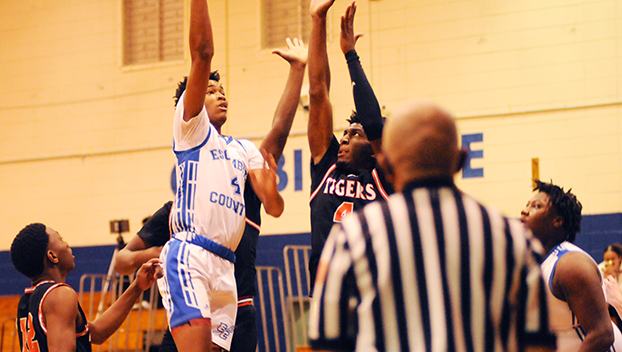 Williams, who was unstoppable inside, matched his scoring total from the previous night, a 63-47 loss to Mary Montgomery on the road.

Late in the fourth period, Escambia County’s Jacob Dirden and Jacobey James made key free throws to put the game out of reach.

ECHS coach John Shears said the team played about the same as it did Thursday night at Mary Montgomery, however.

ECHS held a 34-27 lead going into the fourth period, but the Tigers went on a quick 5-0 run to close the game.

Tanner Durant added a 3-pointer to put BCHS ahead 37-36 a short time later.

Williams answered with a short spurt of his own to put the Blue Devils ahead 40-37.

With less than 4 minutes left, Durant made another from the arch to tie the game.

After trading timeouts, ECHS then went on a 7-0 run thanks to the made free throws.

BCHS led 10-8 after the first period.

With the victory, the Blue Devils improve to 11-11 on the season.