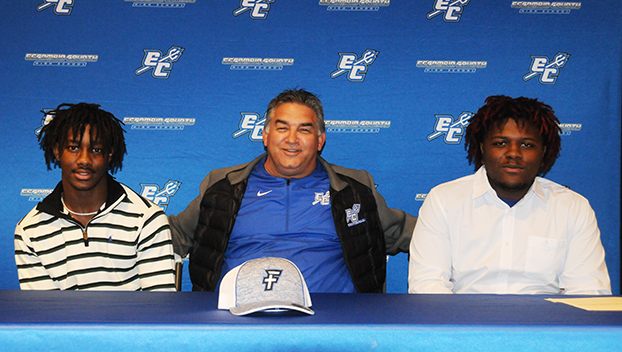 Escambia County’s Jacobey James and Dezmun Crenshaw signed their letters of intent to play football at Faulkner University on Feb. 15.

The seniors signed their letters in front of classmates and teammates in the school’s auditorium.

“Being an athletic director and coach, this is the best part of what I get to do,” ECHS coach Scott Mason said. “This is a really special moment for these young men.”

Mason said both James and Crenshaw are not only good players, but good young men.

The process to get James and Crenshaw to sign their letters with the Montgomery private school went through Mason and his friendship with Faulkner University head football coach Tommy Wasden.

“He (Wasden) asked me over the summer if I had any kids I (Wasden) wanted to look at,” Mason said. “He was here at our first football game, and he kept up with them through the season.”

Mason said the signing is like an icing on the cake because all of the coaching staff – volunteers and position staff – work extra hard to help football players get somewhere in their futures.

During his senior season, James played at wide receiver and safety for the Blue Devils. Crenshaw played at nose guard on the defensive line.