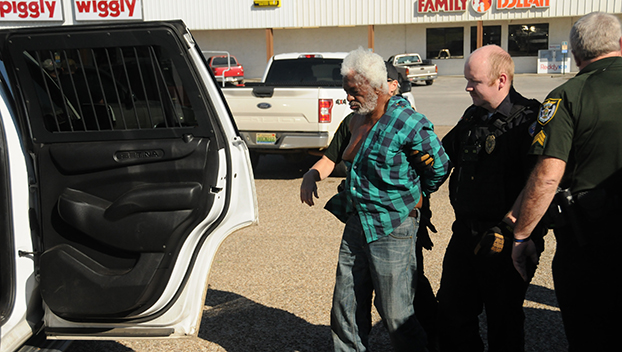 An Atmore man is facing several felony charges out of Florida and Alabama, according to the Atmore Police Department.

Chief Chuck Brooks said in a release that Lem Roy Sanders, 73, of Atmore, is facing three counts of aggravated battery on a law enforcement officer in Florida; one count of attempted murder; and one count of fleeing and attempting to elude, both in Alabama.

Brooks said on Feb. 24, the APD responded to United Bank in Atmore on Nashville Avenue, in response to a person being disorderly and refusing to leave the premises.

“APD officers arrived on scene and attempted to speak with the offender who was sitting in his vehicle at the bank,” Brooks said.

Brooks said when officers approached the suspect vehicle, the driver then fled away allegedly striking an officer with the vehicle.

APD officers then pursued the suspect driver into Florida, he said.

Brooks said the suspect driver, later identified as Sanders, then entered the parking lot near Piggly Wiggly off of Highway 97 in Davisville, Fla.

“While in the parking lot, the suspect driver then struck an unmarked APD police unit causing damage while trying to flee from officers,” he said. “APD officers then forcibly entered the vehicle by breaking out the driver’s side window to remove the driver from the vehicle. The driver was then taken into custody by the Escambia County (Florida) Sheriff’s Office.”

Laptops, office furniture, vehicles, generators and even portable paint booths are among the 365 lots of items up for bid... read more