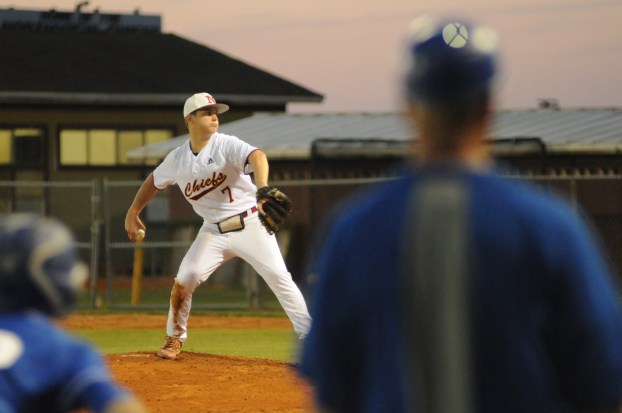 Landis threw a complete game, allowing one run, striking out four and walking one.

The Royals drew first blood in the opening inning, but NHS answered with a run of its own in the second frame on an RBI single from Cody Thomas.

Later in the game, Landis, along with a good defense behind him, got out of a jam in the top of the fourth inning.

From there, the Chiefs put some small ball play together, scoring one run in the fourth to take a lead they wouldn’t give up.

“Our team’s cohesiveness helped us pull out the big win,” NHS baseball coach Jeremy Greenwell said. “This team does a great job picking each other up when going through all of the adversity that the game of baseball imposes upon them.

“Without that, we don’t get the win tonight,” he said.

In the sixth inning, the Chiefs added their third run on a balk.

“Cody Thomas really stepped up big in some key situations at the plate,” Greenwell said. “Josh Landis pitched a heck of a game with our defense playing solid as a whole behind him. This group has a high ceiling.”

The Chiefs visit Jay tomorrow night. If the Chiefs win, then they’ll secure the No. 1 seed for the district tournament.

Escambia Academy’s boys and girls track and field teams finished in the top five of their last home meet on... read more