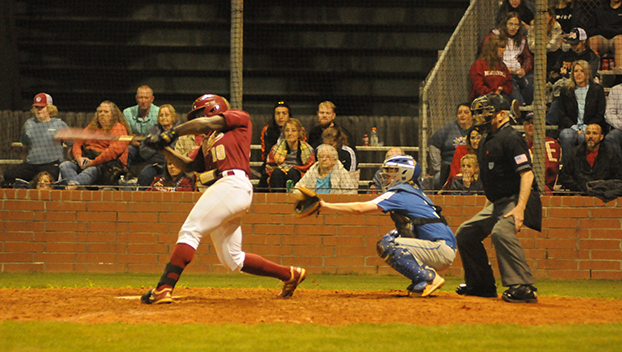 Northview's Jamarkus Jefferson threw a one hitter tonight at Jay, Fla., and scored a run to help lead the Chiefs. | Andrew Garner/Atmore Advance

Northview’s Jamarkus Jefferson threw a one-hitter and the Chiefs topped Jay, Fla. 2-0 to claim the FHSAA Class 1A, District 1 championship tonight at JHS.

Jefferson threw a complete game, striking out four, walking two and allowing no runs to earn the win.

“Jamarkus pitched the best game of his career in all categories,” NHS baseball coach Jeremy Greenwell said. “Jamarkus became the man (Thursday night) that I wanted him to be since he first stepped on campus.

“He had command on the mound and took control of the game in his own hands,” he said.

Jefferson also led NHS at the plate, going 1-for-2 with a run. Josh Landis went 0-for-2 with an RBI.

Luke Bridges also scored a run for the Chiefs.

C. Walters also threw a one hitter, allowing one earned run and struck out six for the Royals.

“I couldn’t be more proud of this team and what they have accomplished this year,” Greenwell said. “Our two seniors have lead where needed and the underclassmen have played up to a level above their years.

“They deserve every bit of credit for the work they have put in,” he said.

“I take nothing away from the Jay players and their head coach, Mike Roberts with the job he has done at Jay,” he said. “Coach Roberts does a great job. He’s one of the best things for Jay athletics. We split with them in the regular season and good Lord willing, we were able to come out on top.”