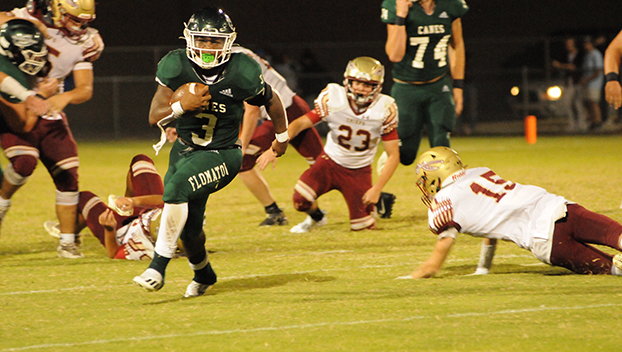 Flomaton’s Damerion Findley scored three touchdowns and the Hurricanes pulled away in the third quarter to beat Northview 38-14 tonight in their season opener.

Findley scored touchdowns from 9 yards in the first quarter, 4 yards in the third and on a 60-yard kick off return in the fourth.

“They did a good job,” FHS head football coach Doug Vickery said about NHS. “Their running back’s (Jamarkus Jefferson) a really good player. I thought they ran the ball really hard. They did some things schematically to effect us.

“After halftime we made some adjustments,” he added. “I thought their quarterback (Kaden Odom) did a great job. He impressed me.”

The Bratt, Fla. Chiefs had a solid game plan in the first half, holding the Class 3A No. 7 Hurricanes to 14 points.

Jefferson scored his team’s only touchdowns from 17 yards in the first quartrer, and 3 yards midway through the second for a 14-6 lead.

Flomaton answered some 3 minutes later on a 59-yard strike from quarterback Zeb Vickery to William Rollin. Findley added the 2-point conversion to notch the game at 14-14.

In the second half and after Findley’s 4-yard touchdown rush in the third, running back Deontay Averette scampered 52 yards on fresh legs to put the game away at 28-14. Findley finished the game with 295 yards on 24 carries.

FHS netted a safety around midway through the fourth quarter, and Findley scored his final six points a short time later on the kickoff return.

NHS head football coach Wes Summerford said the boys put together a good first half, but thought they lost their “muster” in the second.

“We came out dead in the second half,” Summerford said. “We couldn’t respond the right way, and that’s something we’ll learn.”

Summerford added that his Chiefs played a good team in FHS

“But, I felt like we could’ve fought a lot more,” he said. “We’re young and we’re going to learn from that. We’ve got some growing pains; that’s what we’ve got to work on at practice.”