James Howard Shell, 88, passed away Aug. 21, 2021, in Spanish Fort, where he had been a resident of Westminster Village for the past four years. 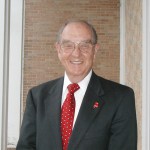 He was preceded in death by his wife of 69 years, Nannette Cobb Shell.

Howard is also survived by his brother, Cary E. Shell Jr. (Frances); and sister, Linda Shell Tolliver (Wilbur Gotham), both of Pensacola Fla.
Former Mayor Shell requested that his memorial service be postponed to a later date. He was concerned for the health of family, friends and citizens of Atmore due to the high rates of viral infection. Public notice will be given for date of service once determined.