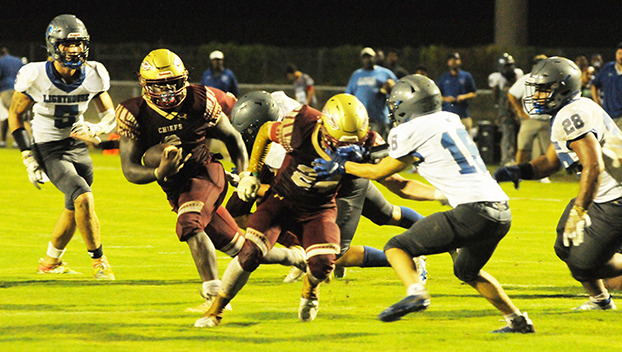 Northview outscored Lighthouse 14-0 in the second half Thursday night as the Chiefs recorded a 43-28 victory, their first of the season.

With only a couple days of work ahead of the game, the Chiefs and Lighthouse traded scores in the first quarter. NHS went ahead 22-12 in the second, Lighthouse then took a lead with two straight scores and the Chiefs notched a kickoff return for a touchdown late in the first half to take the lead at the break.

“I think it was just an ugly game, to me,” Chiefs head football coach Wes Summerford said. “It’s a win, and I explained to our kids that this is the foundation and this is a start. The rest of the season we’re going to build up from here.”

Summerford added that throughout the schedule it’s all about preparing for the playoffs.

“The goal is to get better each week,” he said.

Northview running back Jamarkus Jefferson scored three touchdowns in the win. He ran back a 57-yard kick off return in the first quarter; ran in a 6-yard touchdown rush in the second; and put away the game with a 8-yard touchdown rush late in the four quarter.

Safety Wyatt Scruggs scored the 75-yard kick off return for a touchdown with 50.2 seconds left in the first half; and quarterback Kaden Odom hit a long scamper with 8:02 left in the third to give NHS a 36-28 advantage.

The Chiefs’ defense stepped up big in the second half, getting three interceptions, the last to seal the game.

“Anytime you get turnovers it’s huge,” Summerford said. “It’s an opportunity to get the defense off of the field. We look at three and out percentages. When you do something like that that helps that percentage. The object of the game is to score, adn you try to keep the ball in your offense’s hands.”

Summerford said he was proud of the defense during the second half with the shutout.