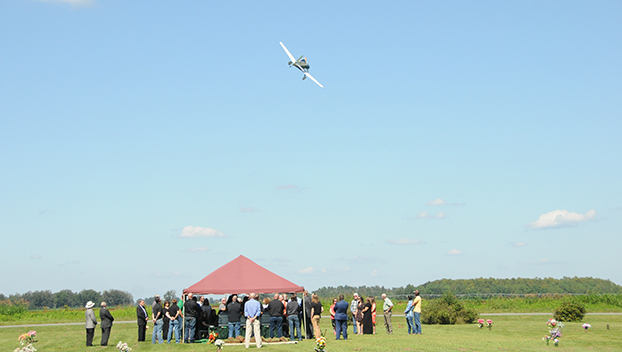 Several area aviators paid tribute to one of their own Oct. 8 during a flyover of Leonard Purvis’ graveside service at Serenity Gardens in Atmore.

The flyover consisted of between 7-8 planes flying in a missing man formation. The formation is an aerial salute performed as part of a flyover of aircraft at a funeral or memorial event, typically in memory of a fallen pilot. Purvis was a former crop duster.

Sky Warriors, the Pensacola (Fla.) Air School and others participated in the flyover.

“His family requested a flyover over the cemetery on the north end of the (Atmore Municipal) airport,” Airport Manager Freddie McCall said. “This was just a way to honor a fellow aviator.”