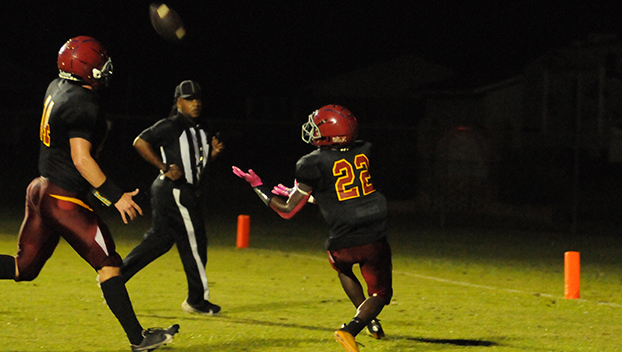 Escambia Academy’s Landon Sims accounted for three touchdowns and Bubba Nettles added one in the first half as the No. 2 Cougars beat Lighthouse Christian Academy 43-15 tonight on homecoming in Canoe.

With the win, EA improves to 7-1 overall, and hosts Southern Academy in AISA Class 2A, Region 2 action next week. The Cougars have already solidifed the second seed in the playoffs. EA faces Bessemer Academy in a non-region contest Oct. 29 to close out the regular season.

EA head football coach Hugh Fountain said the boys played well, adding that the contest allowed them to work on a few things.

“We try to work on everything to get better,” Fountain said. “We could’ve stayed on the ground more, but we were trying to work on things to improve on from the game last week.”

Fountain said they were proud to be back home.

“We had a nice homecoming crowd tonight,” he said.

Next week, EA will celebrate the 50th reunion of the Class of 1971.