Canes haven’t, won’t give up 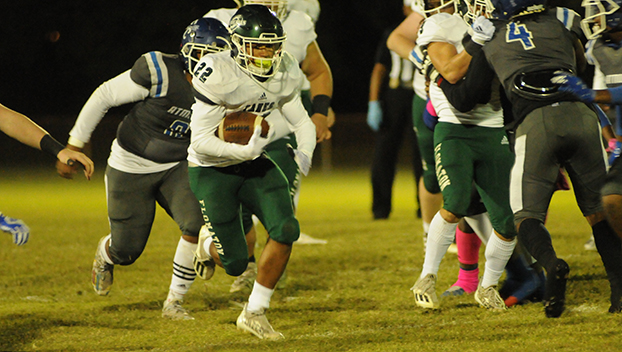 Every season has its own story.

For Flomaton, the Hurricanes realized during their 2021 campaign to never give up.

FHS will visit Montgomery Academy tomorrow night in the first round of the AHSAA Class 3A state playoffs.

Quarterback Zeb Vickery, lineman Austin Lambeth and running back Deontay Averette all said their progression this season has gotten better.

“We’ve obviously gotten a lot better as far as knowing our responsibilities,” Vickery said. “We’ve grown together as a team. We’ve gotten better chemistry since August.”

Some things the team has done to gain a tighter bond is holding Madden video game tournaments and eating together.

When asked if there were any friendly competition incentives, Averette said a small wager was held during the Hurricanes’ 42-0 victory over Escambia County. He won the bet.

The Hurricanes began the season strong, winning four straight. After its open week on Sept. 24, Flomaton lost a close battle to Bayside Academy 28-21; beat Excel 21-12; lost 21-9 to Hillcrest-Evergreen; lost 30-29 to T.R. Miller in an overtime thriller; and beat ECHS to end the regular season last week.

Given the last five games, the players admitted that they realized during the stretch that they can be beat.

Vickery said through the losses, the team has always found a way to bounce back.

“We just have always told ourselves to not let it bother us that much,” Vickery said. “You’ve just got to look forward to the next week. Now, after Friday, you’re not promised next week. During the regular season, you get beat by Bayside and Hillcrest, you can always bounce back.”

Averette added that the losses helped the team get better.

“They really make you think about what you need to do to get better,” he said.

All three said that the team can’t make many mistakes and they have to know their assignments on the gridiron as the postseason starts tomorrow.

Montgomery Academy fields a Wing-T type of offense, and the Hurricanes have a good defensive game plan ready for the contest, all three said.