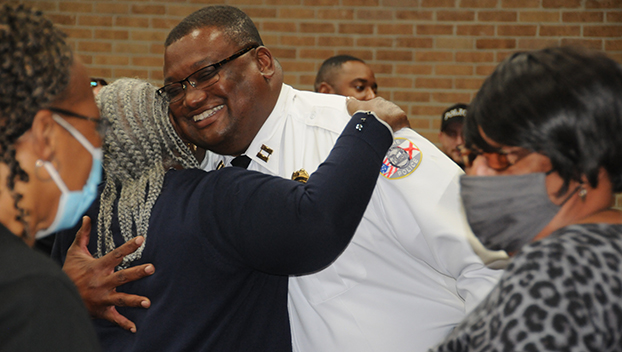 Capt. John Stallworth pauses, brings the radio to his lips and calls for a 10-42, signaling his end of tour with the Atmore Police Department.

Family, friends, police and fire colleagues held a surprise retirement party for Stallworth on Nov. 2. He is is retiring after more than 22 years with the APD.

Stallworth said it’s been an honor and privilege to work at the APD, serving a city he grew up in.

“They hired me right off of the K-Mart Garden Shop when they gave me the call,” he said. “Working in the city you grew up in took a little bit of adjusting to; it made me grow up. It made me grow up especially in the areas where you hold yourself accountable. This (job) was the first time in my life where I didn’t think about just me.”

Stallworth said the reason he got into law enforcement was to be a state trooper.

“It just so happens the former mayor (Howard Shell), his wife was a counselor at the high school,” he said. “She asked me what I wanted to do when I got out of school. I told her I wanted to get into law enforcement. She said she’d tell Howard. I had no idea who Howard was.”

Stallworth said on graduation night, she encouraged him to talk with Mayor Shell.

“He then sent me to (former) Chief (Glenn) Carlee,” he said. “I was only 19 at the time and I called Chief Carlee once a month for 12 months. Finally, he told me, ‘I promis you I’ll give you a job,’ and two days before my 21st birthday, they hired me.”

Stallworth began his tour with the APD in October 1994 as an entry level officer walking the downtown busineses. He worked in the alley position for six months, and Stallworth was then promoted to the rank of patrolman. Five years later, he was promoted to seargeant, where he worked for a year before accepting a position with the Bay Minette Police Department.

He worked with the BMPD for five years before returning to the APD, where he rose to the rank of captain after working briefly in investigations and serving as a lieutenant of the patrol division.

Stallworth said a memory that will stick with him involved saving a child’s life some 20 years ago.

Chief Chuck Brooks recalled the story during the ceremony.

“The hair started standing up on the back of my head because not ony did he do this for the other child, but another officer wrote to the chief at the time and he felt in his heart to tell him what all exactly John did,” Brooks said. “He saved the child’s life. The child was non respnosive. He did CPR all the way to the hospital. The child startdd breathing when they got to the hospital.”

In fact, the child, now an adult, is an employee at Jason Pilger Chevrolet and Stallworth got the chance to meet them about a month ago.

“(The experience) made you think you can make a difference,” Stallworth said about meeting the person he saved.

Stallworth said his favorite part about working at the APD was being around people, adding he loves people.

Brooks said a lot of officers will miss Stallworth.

“I will miss you,” he said. “Whatever you decide to do (in retirement), I know you’ll be successful. You’ve got a good background and are good people. I know Poarch is happy to have you come on board. I’m sad I’m losing you, but I know they’ll have gained an excellent officer.”

Stallworth said after about a week off, he’ll begin as a patrolman for the Tribal Police Department.

In addition to giving his last call with the APD, Stallworth went through a surrendering firearm tradition and was presented a plaque honoring his service to the city.

Stallworth is married to Tyann, and they have one daughter, Alexandria.