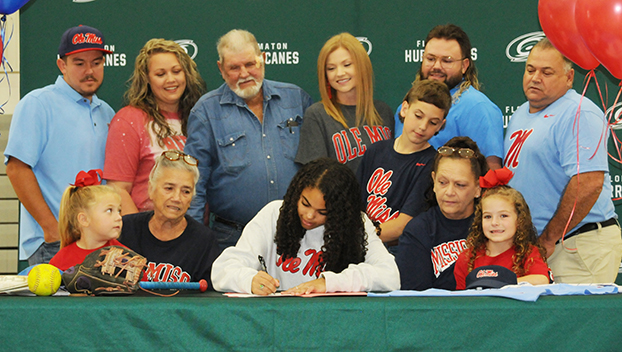 Lassiter, a three-sport athlete at FHS, picked the SEC school over five others. Last season, she posted stellar numbers from the circle, striking out 235 batters in 143.1 innings. She allowed 95 hits, five of which were homeruns. Behind the plate, Lassiter had a .573 batting average.

The senior comes from a line of athletes. Her mom, Cassie, also played softball while in high school.

FHS softball coach Jeff Haney, who coached against Cassie while at Escambia County, said both have drive and determination.

“Their games are so completely different athletically,” Haney said. “There are a lot of personal ties that are similar, just because they’re both winners. They’re going to do what it takes to be a winner.”

Haney said Cassie played just about anywhere she wanted on the field.

On Lassiter’s play, Haney said as far as athletes go, she’s probably the best female athlete that’s come through Escambia County (Ala.) and the area.

Nick Roberson, who was Haney’s assistant coach at ECHS, said even when they’d play upper class teams, Cassie would keep the game close.

“Her (pitch) was a straight fast ball,” Roberson said. “She has curve balls and others. She took it personal. It was a different mentality with Cassie. She was a bulldog. She was the leader. She was the alpha.

“Just to see that and to know Jalia and know where she came from, and to be on the field with the both of them, it was a real treat,” he said.

“There hasn’t been a lot of stuff I had to do to help her on her game,” he said. “It was more of a maturation process in how she handles situations and her teammates. She’s been a leader since she was 12 years old. She’s still growing, and she’s only going to get better. She’s going to get to Oxford (Miss.) and have seniors showing her what it’s all about.”

One thing coaches noted about Lassiter is that she works hard on her craft.

“Jalia has a natural talent and ability,” Hammond said. “She’s a graceful athlete. It doesn’t matter what ball you put in her hand, she’s good. She also works hard at what she does. There are so many times you see the natural athletes not put in the extra time and effort to be good, but that’s not the case with Jalia.

“Especially this past year I’ve seen her grow,” she added. “It’s been great to see her grow as an athlete and as a person. She’s going to do such great things. Part of that is because of her family.”

Hammond said Lassiter’s family is such a tight knit group that she remembers when they’d all come and watch Cassie play at FHS.

Lassiter said signing with Ole Miss meant a lot to her.

“It means a lot, especially having all of my family here,” Lassiter said. “I’m a really big family person. It’s just a big achievement for me and my family, especially coming from a small school in 3A.”

Lassiter, who played travel ball with the Lady Dukes Lamar out of North Carolina, said softball has been her sport since she was little.

“When I was literally 5 years old, my grandfather had me out there pitching in the yard,” she said. “My mom was playing college and she was pitching. My granddad was practicing with me and got me to where I am now.”