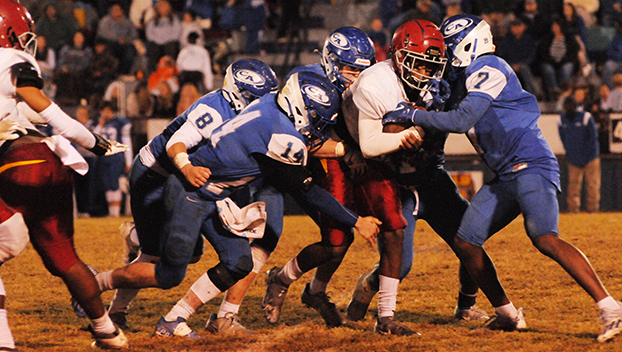 LAFAYETTE — All Escambia Academy needed was a good start.

The Cougars got that and more as they defeated defending champion Chambers Academy 37-13 on Nov. 12 in the AISA Class 2A state semifinals at Torbert Field.

EA quarterback Landon Sims and running back Bubba Nettles scored two touchdowns eaach in the first half, and the Cougar defense held true throughout the contest.

“We came out knowing what we had to do,” EA head football coach Hugh Fountain said. “We came out and played so well in the first half. They got after it. In the last four to five games, they’ve been working in the right direction and tonight it came to fruition for us.”

With the victory, EA improves to 11-1 overall, and will meet rival Autauga Academy this Friday in the state championship at the Cramton Bowl in Montgomery. Kick off is slated for 3:30 p.m.

Fountain said the semifinals win was something the boys were focused on achieving.

“Six years in a row is long time,” he added.

Midway through the first quarter and after stopping a Rebels offensive attack, the Cougars got on board with a 1-yard touchdown run by Nettles.

The Cougars got a three-and-out on defense, and stretched their lead some 5 minutes later in the second quarter.

Defensively, the Cougars’ back field was the difference in the game. Sims caught an interception with 7:59 left in the half. He would go on to catch another interception in the third quarter, along with Nettles.

After the turnover, EA took advantage with a 3-yard touchdown run by Nettles some 5 seconds later.

Chambers got on board on its next possession on a 15-yard run by TY Trammell with 4:12 to go in the opening half.

EA added to its lead on its next possession with a 8-yard touchdown run by Sims. With the point after, the Canoe School led 28-7.

The Rebels, who used a dual quarterback system with JoJo Hendrix, who is a passer, and Jordan Benbrook, who is more of a runner, drove the field in a 2-minute offensive display.

With time running out, CA had a play at the 1-yard line, but EA’s Kanye Hooks made a tackle to quell the try.

Fountain said the goal for the game in its entirety was to play better defense.

“Our goal was when we came in was to play way better defense in the playoffs than we have played this year,” he said. “That’s what we were thinking and aiming toward.”

After Sims’ second interception catch, the Cougars went up big on a 6-yard touchdown reception by Maliki Haynes with 3:02 left in the third quarter.

Nettles then got his interception with 1:15 left, and EA led 34-7 going into the fourth.

For the Rebels, this was their first playoff loss at home in six seasons.