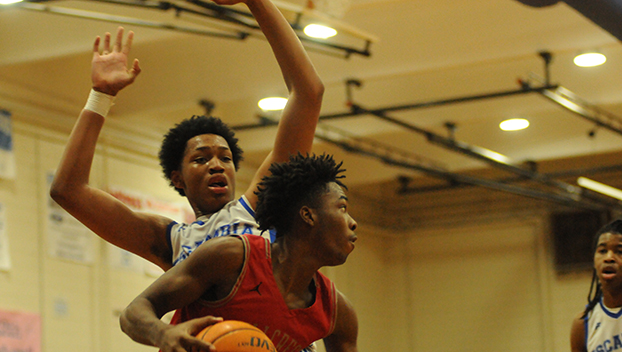 ECHS outscores Jaguars 37-11 in second half

That’s what Escambia County made in the second half as the Blue Devils beat Hillcrest-Evergreen 67-38 tonight in front of an electric crowd in Cornell Torrence Gymnasium in Atmore.

The first half between the Class 4A No. 2 Blue Devils and the Class 3A No. 6 Jaguars was a back-and-forth affair. Both teams held single-digit leads in the first 16 minutes of the game. ECHS led 30-27 at halftime.

The Blue Devils then went on a 12-0 run in the third period and pulled away for good late in the same period to lead 50-30 going into the fourth.

Head coach Layton Knight said they switched to a zone defense, knowning that the Jaguars would match up in a man-to-man defense.

Knight said Stephen utilized his size on the court during the win.

Sheldon Williams led ECHS with 24 points. His brother, Stephen, added 12 points and made big plays when it mattered.

The Blue Devils are back in action tomorrow night at home against Baldwin County. First tip is 4:30 p.m. for the B-team.