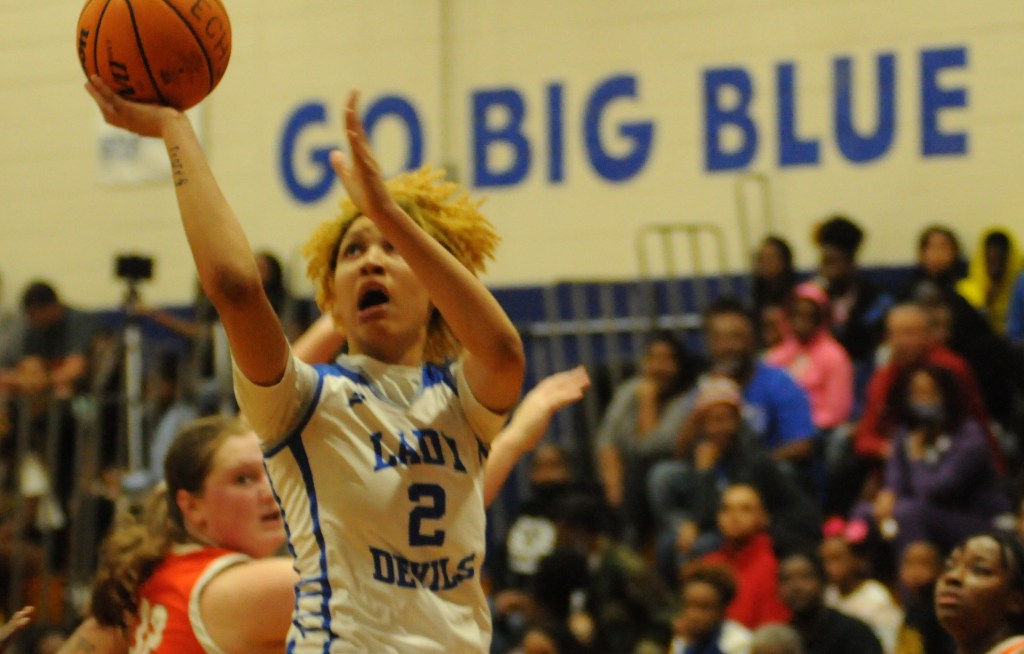 Escambia County’s Makayla Lyons hit a rebound and putback with less than 10 seconds left and the Lady Blue Devils held on to beat Baldwin County 46-45 tonight at Cornell Torrence Gymnasium.

Lyons’ eventual game-winning bucket ended a game where the Lady Blue Devils fought back from a single-digit deficit in the second half. ECHS trailed 20-19 at halftime, and 33-24 at the end of the third period.

After some early buckets in the fourth period, Lyons nabbed a steal and got the ball to C’anna Betts, who was fouled a short time later. With 3:07 left, she made her free shots and ECHS led 35-34.

Guard Timia Gaines hit a 3-pointer some 20 seconds later to give the Lady Blue Devils a slight edge at 38-34.

Kaeleigh Boykin drove the baseline for a pair of points a short time later for the Lady Tigers.

Then, Escambia County’s Jayla Adams hit the back-end of a pair of free shots, and Boykin answered with a layup of her own to keep it close at 44-41. BCHS then took a timeout with 41.2 seconds left.

Out of the timeout, Grace drove the lane for an easy basket. The Lady Tigers took a timeout with 31.5 seconds left.

From the inbound, Boykin stole the ball from Lyons and made an easy basket to give the Lady Tigers a 45-44 advantage.

On the other end, Betts made her rebound and putback, and then capped the game by getting her hand on an attempted 3-pointer with time running out.

Sheldon Williams scored 20 points; Conor McPherson had 18 points, including three 3-pointers in the first period; and Hakeem Johnson added 13 points in the win.

Baldwin County came out shooting hot in the fourth period, but the No. 2 Blue Devils kept a good lead down the stretch.